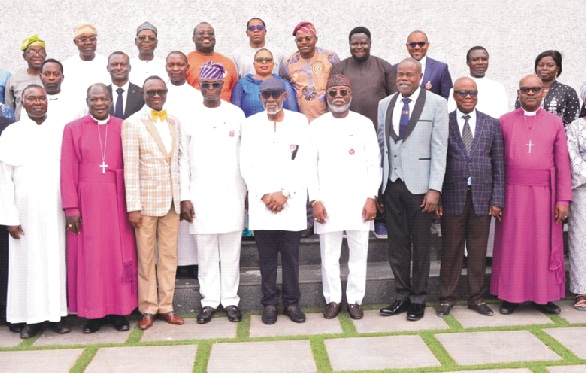 Ondo State Governor, Arakunrin Oluwarotimi Akeredolu yesterday said his administration is fulfilling its promise not to owe workers’ salaries at the end of its tenure.

Governor Akeredolu, who disclosed that his administration has already paid up till November, 2022, explained that the December salary was delayed on the advice of the Labour leaders to allow workers meet new year financial obligations.

The Governor assured that the December salary will be paid soon, while promising that the one month remaining from the inherited seven months salary arrears will also be paid before he leaves office.

“We inherited seven months salary arrears, we paid six. Before I leave, I will pay the remaining one”, he said.

Governor Akeredolu spoke on Tuesday during the Annual Prayer Meeting with Public Servants on the first working day of the year held at the Governor’s car park, Governor’s office, Akure, the state capital.

He assured that his administration would continue to give priority consideration to the well-being of the Public Service amidst competing demands from other segments of the State.

The Governor noted that in spite of the State’s lean resources, his administration will continue to do more and not shy away from its responsibility.

He also described as heartwarming, the workers’ testimonies new Duty Tour Allowance, training and retraining, provision of working tools and enabling environment for the service to thrive, among others.

The Governor further assured of his administration’s resolve to improve the quality of lives of the people and deliver on promises.

“We are guided by the REDEEMED agenda of our administration to continue to speedily address the infrastructural gap. In reaction to the dictates of time, our security architecture is being regularly reconfigured and rejigged to ensure that peace continually reign supreme across the 18 Local Government Areas of the State”, he added.

Akeredolu said his administration is clear in its vision of a better tomorrow which the people of the State will be proud of irrespective of religious and political affiliations.

“I am convinced that this year will be a better and eventful year, given the expectation that the judicious implementation of the 2023 Budget titled “Budget of Shared Prosperity” will bring succour to our people. It is a known fact that no administration can fly higher than the delivery capacity and capability of its bureaucracy,” he noted

The Governor who thanked all public servants in the State for their cooperation, particularly the organised Labour for their understanding, also explained that without the commitment of the workforce, his administration would not have recorded the modest feats achieved in its policy thrust.

“I wish to enjoin all our workers to sustain the good working relationship with our administration in our quest for sustainable growth and development.  More importantly, it is imperative for everyone to ensure accountability and transparency in government financial transactions to expand our revenue base and increase the quantum of fund available for the execution of government projects.” Governor Akeredolu stressed.

On the 2023 general elections, the Governor called on civil servants and the people at large, to play by the rules while exercising their franchise at the poll.

“Therefore, I implore you to do your job as required by the Rules and Regulations. I demand nothing more! Good enough, fund has been approved for the printing of substantial copies of your new regulatory books to enhance your knowledge and their appropriate application,” the Governor noted.

Earlier in his welcome address, the Head of Service, Pastor Kayode Ogundele disclosed that 8,415 Public Servants across the State were promoted with financial benefits in 2022.

While thanking the Governor for his continued support in all areas pertaining to issues affecting public servants in the State, the Head of Service described the Governor as worker-friendly.

“Thanks to Arakunrin’s commitment to workers’ welfare in ensuring the payment of all outstanding salaries. The present administration, in a bid to reduce shortfall in the workforce, has continued to recruit fresh hands in the critical areas of need.

“For instance, 52 temporary staff of the Ondo State Emergency Medical Services Agency (ODEMSA) were recently given permanent appointments. Moreover, Ondo State workers and retirees have had a new lease of life under this administration. For instance, a number of staff of the Owena Press Limited who retired long years ago received their gratuities last month.

“The Orange Health Insurance Scheme (ORANGHIS) was inaugurated to give public servants and their immediate family members access to qualitative health care in preferred health facility of choice at low or no cost”, he added.

In his exhortation titled “My Presence Shall Go With You”, the Archbishop of the Church of Nigeria, Ondo Province and Bishop of Akure Anglican Diocese, Most Rev Oluwole Borokini, who congratulated the people for making it to the new year, particularly admonished them to be loyal, committed to duties and shun corrupt practices in all their activities so that they will get to the Promised land and enjoy God’s presence in the new year.

The Archbishop equally commended Governor Akeredolu for the annual prayer meeting to launch the public servants to a successful new year, most especially in the governance of the state, and also championing the security architecture for the state and South-West region.