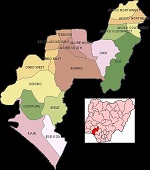 From Akinnodi Francis, Ore
|
Odigbo Local Government boss, Mrs. Margaret Akinsuroju has said that she would continue to accord the welfare of workers in the council a priority.

Akinsuroju who made the pledge in her office in Odigbo, said that this was to boost their productivity and live a decent life.

Her words: “The welfare of the workers in the state is topmost in the heart of Governor,  Oluwarotimi Akeredolu, so all his followers must key into  this.

“Despite low fund, we would continue to do our best to encourage productivity through training of workers and providing decent working relationship”.

She explained that government actions and programmes must impact positively in creating  motivation for personnels to discharge their duties effectively and efficiently.

“For workers’ potentials to be fully unleashed, government need to create effective platform for them to pursue their vision, aspirations.

The former Commissioner for Adult, Vocational and Technical Education stressed the importance of attitude which she described as key to success, nothing that they should avoid being a toxic in their office.

She appealed to workers to show more commitment to their duties and be Godly in their dealing so as to rededicate themselves for better service for the good of the council and the state in general. She also stressed the importance of hard work.

Akinsuroju commended the Governor for his determination to transform the state especially Ore in Odigbo local government and enhance the well-being of the citizens.

She  said that the present government in the state has implemented several life changing policies for the people, urging the citizens to continue to support the Akeredolu-led administration for more dividends of democracy.