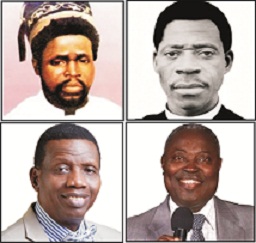 By Theo Adebowale
|
Revival is a popular commodity among the faithfuls in Nigeria. In the church, the gospel has prospered. In the Christ Apostolic Church, great exploits were done by the hands of Apostle Joseph Ayo Babalola in the 1940s to 1960s and the church has continued to produce other prophets in the tradition of the great evangelist.

Volumes are also recorded by Church historians of great signs and wonders performed in the Cherubim and Seraphim through Moses Orimolade and hundreds of other ministers in the church. We cannot forget Pastor Bilewu Oshoffa, the great Shepherd of the Celestial Church of Christ.

Before our own eyes now are Pastor W. F. Kumuyi of the Deeper Life Ministry, Pastor E. A. Adeboye of the Redeemed Christian Church of God, Bishop David Oyedepo, the Living Faith Church Worldwide, Dr Daniel K. Olukoya, Mountain of Fire, Senior Prophet T. B. Joshua of the Synagogue Church of All Nations. By the hands of these great men of God, great miracles are wrought on a daily basis and the church of God is marching on.

History records it that in Western Europe and North America revival in the church was followed by great discoveries as in the discovery of the steam engine, great breakthroughs in medicine, science and technology. One visible feature of the revival was that there were movements of the people out of residential, business and industrial estates into the outskirts. Even in cases of persecution, agents of unfriendly governments had to go the extra mile to locate their target.

Thank God for Nigeria and those that are successful in ministry. They started by going into the wilderness to separate themselves and secure a communion with God. Ayo Babalola was on the mountain in Efon Alaaye, Ikeji Arakeji, and other ‘mountains’ far removed from human settlements. When the Redeemed started in Ebute Meta, population was modest, but as soon as it was removed to Km 47, Lagos-Ibadan Expressway it started to blossom until it became a city, the Redemption camp. Deeper Life was in Gbagada and later relocated to Ayobo; when the Living Faith Church Worldwide came to the coast, it found a location in Raji Oba but as soon as great multitudes seemed to be finding their way there, the church relocated to Canaan land in the wilderness of Ota. The exploits recorded by these church denominations and their founders and overseers have encouraged many more to enlist in the gospel army. Where are they? They are on the hills surrounding government and private residential areas. In Oba Ile Estate, an area surrounded by hills, the new era evangelists and prophetesses have taken over. That is the situation in several reserved areas, where people chose, in the first instance for the property of low density population.

Constituting themselves to a nuisance, these churchlets mount vigils, early morning prayers with high decibel megaphones compelling residents to abandon recuperation, meditation, reading, writing, report writing, and sleep, knowing full well that most of residents in these ‘conquered’ territories are active or nominal Christians, yet they are subjected to hardship under noise pollution. Many return from their church activities and social events at dawn to catch a sleep towards morning only to be forbidden by their new breed of Christians that would shout 91 Alleluias, 49 hosannahs, and 37 ‘Ogos’ in the praise of Jehovah, whom I serve!

Monday mornings and other days, when the economically active should be about their jobs, businesses, or search for employment, they gather, and since their gatherings are not inspired by divine wisdom, many of the adherents have only ephemeral testimonies.

Dishearteningly, those that partake in demonic revivals have ‘undeniable’ testimonies as their gods give them visions and inspirations to engage in repulsive exercises for instance, to convert human waste to a meal, to collect female undies, human sperm for rituals. Their own revival emboldens them to traffic in humans and narcotic drugs, high risk business of course, but with handsome rewards while they last. The e-evangelists have refused to go to the wilderness. They would rather occupy our residential areas where they daily torment us with their gospel. The ministries in charge of environment, housing, urban and regional planning cannot be bothered, nor would the agency in charge of property and residential matters. Some of their officials have even held residents to ransom as not a few property documents have disappeared to encourage undercover transactions. In the past, prospective householders were encouraged to patronize Government Reserved Areas to process allocation, but today ownership disputes are no longer unheard of.

Whereas in other lands, great revivals resulted in ground breaking discoveries and breakthroughs, feats in science and technology are hard to come by in Nigeria today, some revivalists are determined to ensure that residents would not dream not see vision. They cannot remember that God was not in the lightening, the storm and in the thunder, He is in stillness. Their own revival cannot take them out of residential areas. Though Abraham the model of faith went 5 day journey to offer Him sacrifice, they are not prepared to go any further than 15 minutes to offer their own sacrifice. They are prepared to label protesting residents as obstructing the gospel, and as such blackmail them as enemies of the gospel. Again these evangelists forget that orderliness is sacrosanct in heaven and they pray God’s kingdom come and His will be done on earth as it is in heaven.

A believer that has a word to be like Peter, to throw in the net once more but spends Monday in the early morning prayer meeting would have his faith undermined by not activating his faith in accordance with the biblical pronouncement that there is a time and a season for everything. Many of these church outlets are even open to temptation by desperate public officials that pilfer public treasury only to bring a fraction to sponsor prayer warriors against auditors, forensic investigators and prosecutors. Because what would keep ringing in their mind is that money is the vehicle of the gospel, it is not difficult for them to sell their souls to the devil buying and selling as it were, in the synagogue.

As housing officials including Christian among them have already sold their souls to satan, shall we invoke master plans and lay out and insist that rules and regulations be obeyed in matters urban and regional planning, as much as in housing with sanity. Economic productivity is undermined in an atmosphere of disorderliness and lawlessness which are definitely properties of corruption. More revenue can be generated when citizens enjoy better health.

In the mean time, shall we request the Christian Association of Nigeria, CAN, and the Pentecostal Fellowship of Nigeria, PFN, to call Christian denominations to order, and remind them that the epistles command them to submit to lawful authority? It is unbecoming of the household of Christ to be found peddling noise pollution. Let them go to the appointed places in the closet, church auditorium and the wilderness to worship and give praise to the Almighty. There they should do intercession, offer supplication to the Almighty god, the I AM that I AM.