Wrangling within PDP and 2023 polls 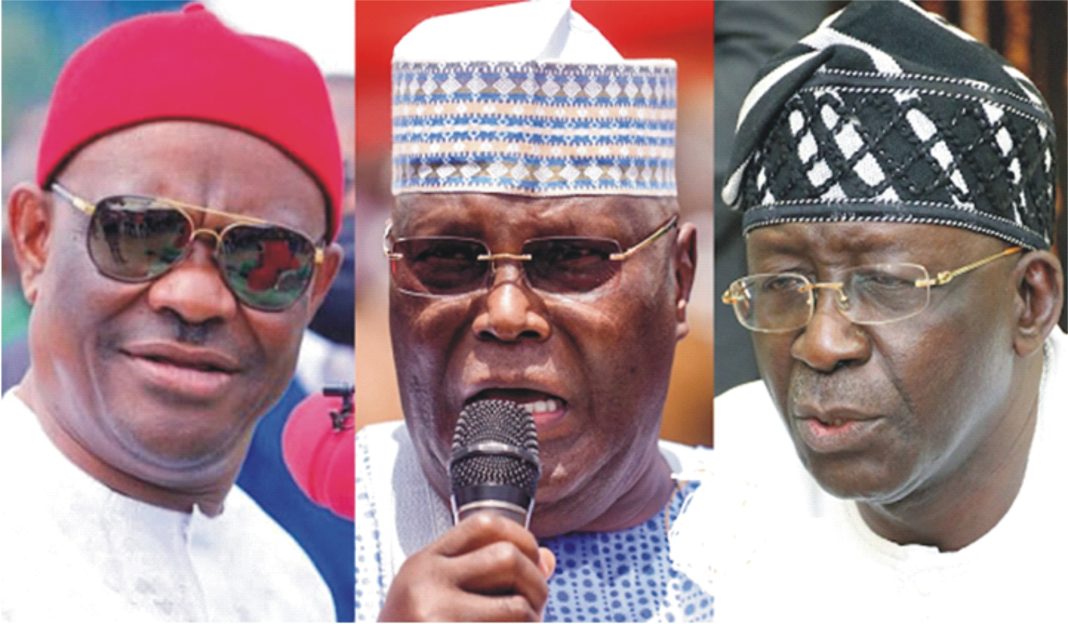 The rumblings of discontent within the main opposition party, the People’s Democratic Party (PDP), the dramatic presidential primary which produced the joint ticket of Atiku Abubakar and his running mate, Delta State Governor Ifeanyi Okowa.  Lack or inability or both of the conflict resolutions party mechanism to either resolve or nip the ensuing crisis in the bud inexorably brought into focus and limelight the individual self interest and shady approach to the all important 2023 presidential race.

For the PDP, it is tantamount to washing their dirty linen in the public for presenting a ragtag posture and failure to put their house in order.  Out of bravado, the presidential standard bearer, Atiku Abubakar, kicked off the so called national campaign amid post-presidential primary efforts to resolve PDP crisis which invariably hit the rocks.

This is an affront and gratuitous insult to the native intelligence of the articulate and politically sophisticated Nigerian electorate.  It is also a far cry and anti-thetical to the presidential standard bearer, Atiku Abubakar, who currently parades a political sobriquet “unifier,” perhaps for the purpose of the February 25 2023 presidential polls.

Who is deceiving who? Look! A whole former Vice president who cannot even bring together his warring members, presumably former party loyalists, as a united family. Doubtless, Atiku Abubakar is a hard shell for the entire Nigerian electorate in the most decisive electorate battle in about four months away!

It will interest the electorate and the whole nation to know the immediate cause of the present political brickbat and uproar rocking the boat of Peoples’ Democratic Party (PDP) at this crucial period of national rebirth.

The ugly incident could be traced to the personal ambition of former Vice President, Alhaji Atiku Abubakar, to become president either by hook or crook without regards to the gentleman agreement of the party; and to rotate presidency between the North/South in the spirit of equity, fairplay and national interest to entrench peace and unity in the country.

Prophetically, this sound and logical agreement informed the main contending political parties, the PDP and APP/AD, to pick their presidential standard bearers from the south, namely General Olusegun Obasanjo (rtd) and Chief Oluyemisi Falae in their respective political parties to slug and fight the 1999 presidential elections.  The outcome of the election, perhaps, could be regarded as success to the present consolidation of democracy in the ongoing political dispensation known as the Fourth Republic.

The on-going controversy that accompanies party crisis nationwide, the issue of party supremacy euphemistically called party discipline, continuously recurring like a decimal is only the master-key for cohesion and survival of any political party aspiring to take control of the affairs of any state or nation for effective governance, and by extension, to sustain political stability for the country, material wellbeing and progress of the entire citizenry.

Having willfully annulled the freest and fairest election won by the business mogul and Social Democratic Party (SDP, now defunct) presidential candidates, Alhaji MKO Abiola, later brutally killed in the process, some firebrand nationalist politicians were non-the-less never despondent on the criminal and delinquent manner and show of shame our military rulers took political governance of Nigeria for a levity and jolly ride.

This informed some eminent and prominent Nigerian politicians across former political divides, notably Uncle Bola Ige, Alex Ekweme, Adamu Ciroma, Ezeife and others.  They took up the gauntlet and organized a political force known as G.30, a movement to struggle and champion democratic rule.

When the Head of State, General Abdulsalam Abubakar extended the olive branch of sincerity and honesty of purpose to hand over within the shortest possible time.  Uncle Bola Ige, SAN, and former Governor of Old Oyo State single handedly drafted constitutions of the three registered political parties viz.  People’s Democratic Party (PDP), All People’s Party (APP) and Alliance for Democracy (AD), which ushered in the on-going political experiment christened the Forth Republic.

Unfortunately as the chips were down, PDP was hijacked by the retired military top brass and personnel who called the shots, and they continued in earnest to control the rulership of the country, leaving the civilians who were more qualified and suited for political governance, to scramble over the crumbs that fell from the master’s table.

For almost upwards of two decades, the erstwhile corrupt and decadent administration, led by People’s Democratic Party (PDP) 199-2015, had gone for the country’s jugular.

The PDP government greedily and callously siphoned the nation’s common-wealth and scarce resources without caring a hoot for the nation’s patrimony. Worse still, PDP chieftains and their collaborators failed woefully to save for the raining day!

Under the auspices of PDP administration across the country, corruption was rife in public places and was the order of the day.  The then president, Goodluck Jonathan, could not decipher stealing from corruption.  That was unprecedented from Nigeria’s former president who laid pious claim to high and sound scholastic attainment.

His wife too, Mrs Patience Jonathan, suddenly rose from smattering knowledge of teachers’ education, and elevated to a super permanent secretary in her marital home state, Beyelsa civil service! The former First Lady and her other co-travellers like Mrs (now) Senator Stella Oduah, Mrs. Alice Madueke, former minister of petroleum, etc in financial crimes against the state held the nation hostage and constituted themselves as law unto themselves.

Now that the PDP is embroiled with in-fighting and internal wrangling going far deep into electioneerings, only God knows when it will subside; rank indiscipline is quite endemic amongst the party faithfuls in the power over the years.

Without regard to code of conduct, the public functionaries have free access to lost public treasury with impunity and connivance of the civil servants.  The absence of right ideological framework to govern well is the bane of national development.

The undermentioned news item was over the years on public domain and undenied up till today: “No fewer than 35 past and 299 former office holders in Nigeria have been linked with multi-billion choice properties in London and Dubai.  The eminent persons were said to have spent over $400 million to acquire 800 properties in Dubai.

“Some of those implicated include a Northwest governor, two former deputy presidents of the Senate and a former National Chairman of the People’s Democratic Party (PDP).”

It is axiomatic and an indisputable fact that incorruptible and virile political parties are indispensable to stable polity.  Our fledgling democracy cannot be an exception to this rule.

Whereas, in the People’s Democratic Party (PDP), the wrangling over filthy lucre, sharing of booties (humongous money) and the outcome of presidential primary interjected with the former ruling party’s pious claim to have turned over a new leaf to govern again.

This was after barefacedly foisting 16 years’ of misrule and gangsterism on Nigeria.

As 2023 general election draws near, any contending political party that takes Nigerian electorate for granted thinking money could buy anything in Nigeria including votes will be courting political disaster.

It is high time People’s Democratic Party (PDP) put its house in order to be relevant in the unfolding political constellations.