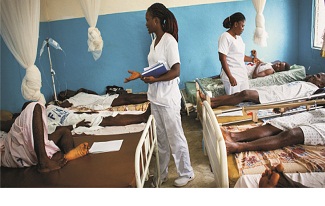 By Bisi Olominu
|
Sympathisers thronged the hospital, swarmed it like bees on a nectar. Real men became uncontrollable and wept openly because of their friend that had just died.

Although, Tomilola’s husband passed on that morning, but he actually died four years ago when he was wrongly diagnosed by a medical doctor in a public hospital. Painful as it was, Tomilola’s grief was not peculiar, her husband was among many that had been wrongly  diagnosed in the country.

Another case is that of late Chief Gani Fawehinmi, SAN, a social critic, human rights lawyer and the only Senior Advocate of the Masses, SAM, in Nigeria, who suffered from wrong diagnosis, which was tied to gross incompetence and negligence.

He had been diagnosed with Pneumonia and was being treated in Nigeria, but by the time his case got critical and was flown abroad, correct diagnosis showed that he had cancer and he died after fighting the latest disease. Nigerian doctor who examined Gani Fawehinmi said he was suffering from asthma and plied him with many asthma drugs.

The case of 4-year-old Adamu Rukayya from Kaduna State was particularly pathetic and painful. The little girl had one of his legs amputated as a result of wrong diagnosis.  Ever since, the girl who has been working with the aid of crutches, cry uncontrollably, demanding for her cut leg.

Another pathetic case was that of an old woman taken to a private hospital in Akure and after many tests the young doctor said she was suffering from typhoid, fever and undisclosed ailment. Money was deposited and after two weeks without improvement, the young doctor suggested that she was suffering from low blood , the pint of blood was paid for but she was never given. Then the doctor suggested  she should be transferred to a hospital in Owo. The family angrily removed the old woman from the hospital and took her to another hospital where the woman spent another three weeks and survived the young doctor’s exploitation and wrong diagnosis.

Another case is that of Sumbo Adeyemi who complained of severe headache and went to Saint Nicholas Hospital in Lagos where she was diagnosed with Intracranial aneurysm and was recommended a brain surgery for the ailment. The family in trepidation seek for another doctor, the new doctor recommended an MRI scan at a Mecure Centre in Lekki. The scan showed not aneurysm but another ailment in the brain.

The family now confused and perplexed because of the two  conflicting diagnosis decided to look for help outside the shore of Nigeria. In the United Kingdom, about 12 doctors attended to Sumbo and rejected outrightly the two diagnosis and said both could not have been for the lady. They told her it was just migraine and it was as a result of insufficient sleep and stress. She was told to just stop watching football and other stressful things. She was thereafter given some analgesics to use.

The lady that was about to be killed in Nigeria by some doctors due to wrong diagnosis is now married with children,  and after much rest the migraine disappeared. She would have been killed for non-existent aneurysm.

Wrong diagnosis by Nigeria’s doctors has become a burning issue. No wonder those who can embark on medical expenditure to foreign countries to  solve their problems are doing so. The major issues are: Are doctors in Nigeria not competent enough or it is because of their indifference and nonchalant attitude  to work? Are the working tools not there or the hospitals not fully equipped?  Once an infraction has been committed, what should be the compensation and how is the doctor involved punished?

Speaking on this nagging issue, Dr. Jonathan Osamor of Oyo State General  Hospital, Ibadan said that for wrong diagnosis to be made there are many components to be looked at. First component according to him is clerking, taking down the patient history. ” If your patient cannot explain very well, you may not be able to extract relevant information from him or her.  There could be communication barrier, which may occur when the patient speak one language and the doctor speak another. Your interpretation of the patient goes a long way. You may mis-interpret the patient “.

” Another component is your physically examining the patient, whether you can elicit one kind of sign from him. This is where your clinical skills come in. If you are not versed clinically, you may not be able to identify which of the system of the body is faulty”.

Osamor maintained that it is the fault of the system we are running in Nigeria. “There’s no policy from the policy makers as to the milestones you can achieve. The point is that when you have a system that’s not organized, it becomes chaotic and things like wrong diagnosis and prescription can occur”.

Also speaking, Dr. Tunde Ola blamed the government at all levels as the architect of wrong diagnosis in the hospital’s across the country. He lamented that many hospitals, mostly the public ones have been neglected for long, reason many doctors are going abroad to horn their trade.

His words:” Take the  public hospitals  for instance  where there is shortage of staff and they have to attend to many patients in a day. In such situation the doctors may not be able to interpret the situation accurately. Couple with this is that most of our hospitals are lacking the required equipment, where we even have, they are obsolete.

Our health system is faulty in Nigeria. We can only overcome this situation when those in government stop paying lip service to the health sector.  How can a doctor be attending to about five hundred patients in a day? Such can lead to wrong diagnosis for such a doctor must have overworked and tired.”

“ Again we must not forget that funding the health sector has been a problem in the country. In normal clime, some countries devoted large chunk of their budget on health sector,  but in Nigeria it is the least and they want doctors in the country to perform miracle. Those going to India, China, Germany and other countries for medical tourism should know that it is because those countries developed their health sectors.

“If their hospitals have been neglected like ours in Nigeria, some of our leaders now going there won’t have anywhere to go. Some of our doctors overseas are breaking new grounds because the equipment and hospitals are developed. We should copy such and bring it home to develop our hospitals.”