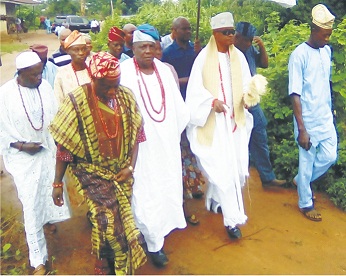 By Olusola Alatise
|
The ancient town of Igbara-Oke, the headquarters of Ifedore Local Government Area of Ondo State was agog last weekend as the Olowa of Igbara-Oke, Oba Adefarakanmi Agbede celebrated the 2018 yam festival in a grand style.

Ijesu Olowa is one of the festivals in Igbara-Oke, as new yam festival is a norm in Yoruba land, which marks the beginning of the time to start eating yam.

Oba Agbede was full of excitement when he saw his subjects, indigenes and non-indigenes in their large number as they accompanied him to the farm to harvest yams for the celebration.

The monarch, alongside his chiefs, Oloris from the royal houses trekked from Oko Olowa through the town down to the market, where he was hailed and praised by all and sundry to his palace where people in their large number dinned and wined together.

The drummers were not left out as various categories of drummers ranging from modern to traditional rolled out sonorous musics to the admiration of the audience.

The people of the town deferred their businesses and their schedules to join Oba Agbede in about three kilometers walk to and from the farm, as residents who could not hide their emotions, said this year’s festival was the best Ijesu Olowa ever had.

They affirmed that previous celebrations were never as elaborate like this, and they are optimistic that the reign of Oba Agbede will usher in more goodies for the entire good people of Igbara-Oke.

Oba Agbede who could not hide his joy, said the reason for new yam festival was to ensure that tradition didn’t go into extinction, noting that he has modernised the Ijesu Olowa festival since he ascended the throne and to seek the continued and unhindered peace, progress and prosperity of the town.

He described the festival as unique because he said it marks the beginning of the Kabiyesi eating new yam for the year, adding that he was impressed with the acceptability of the festival by his subjects

On the significance of the festival, Olowa said it is a forerunner of good things to happen in the community and evidence of a good season.

He said the festival is an attestation to the fact that his subjects are good farmers because he said the yams harvested were very big and good.

“The festival is an affirmation that Igbara-Oke, a nodal town can boast of successful farmers. Yams harvested today were very big. This year’s celebration was the best ever and we will continue to improve on it.”

The monarch said the festival which started during the reign of his forefathers assured that it will continue to be celebrated and that this year’s celebration was the best in recent times saying that he had improved on the celebration he met on ground.

On his acceptability by his subjects, Olowa said it is from God and that his relationship with people even before he was enthroned made people to add the title ‘Ilufemiloye’ to his title.

He said Igbara-Oke has been placed on the global map and that developmental projects including  the establishment of rice industry, road rehabilitation  that are ongoing are being witnessed since he ascended the throne.

Olowa who called on the youth in his domain to embrace agriculture which he said the developed world is using as an alternative for economic development, charged his subjects, home and abroad to continue to cooperate with him to move the town forward.

He also urged the youth to venture more who  agriculture and see it as a viable means of employment office advised them to take advantage of numerous interventions and agricultural empowerment programmes that have been put in place by the government state to improve their wellbeing.

He commended the giant strides of Ondo State Governor, Arakunrin Oluwarotimi Akeredolu, SAN, in the state and Igbara-Oke in particular.

The Oloris submitted that the significance of yam festival is that nobody brings yam to the open market in the town until Kabiyesi celebrates yam festival and enjoined women to give full support to their husbands for their children to blossom.

Speaking on the festival, Onigemo of Igbara-Oke Kingdom, High Chief Sunday Babatunde Aiyegbo said it has been celebrated from time immemorial but that Oba Agbede has added life to its celebration and that residents of Igbara-Oke are happy for it.

“This new yam festival we are celebrating today is an annual event, and it has been from time immemorial. The festival is one of the festivals that attracts sons and daughters of Igbara-Oke both at home and abroad.

“Before today, the King could not  eat new yam until the festival is inaugurated.

“Oba Adefarakanmi Agbede is a lover of culture and traditions, and he is doing his best at ensuring that all the festivals in Igbara-Oke are celebrated in due course. Also, he has empowered the guardians of all the festival so as to have a better outings.

The ascension of Oba Agbede to the throne of his fathers has brought development to our land, both in human capacity and infrastructural developments. The entire town is pleased with him, and we will continue to give him maximum support.”

Speaking on behalf of the youths, Ayodeji Owolabi charged youths not to forget the tradition of their communities, stressing that tradition teaches moral and good things.

“Youth should embrace culture because it teaches moral and good things. It will help us to resuscitate what our forefathers were doing in a very good way.

Thank God, we have a Kabiyesi who is civilized and at the same time culture conscious. Kabiyesi appreciates culture and supports it with all that he has for upcoming generation to see how things were done in the past “