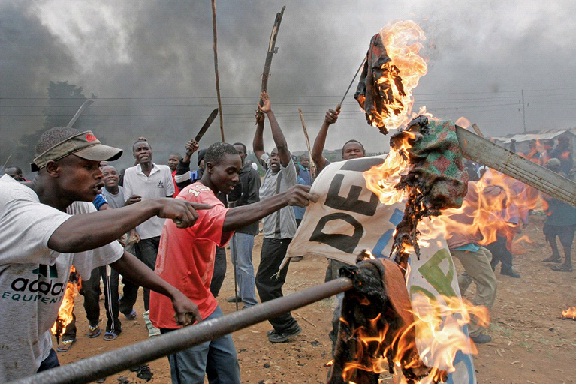 Youths in Ondo state have been urged to shun electoral violence as the October 10 gubernatorial election draws nearer.
This call was made in Akure yesterday at the “INEC citizens’ radio townhall on youth and non-violent participation” in the governorship election, organised by the European Centre for Electoral Support (ECES) in collaboration with the Independent National Electoral Commission (INEC).
In his speech, the Senior Project Officer ECES, Mr Sylvester Somo urged the youth in the state to desist from any act that may jeopardise the successful conduct of the October 10 election, emphasising that their lives are sacred and must be protected.
He further advised the youth to take advantage of their population and turn out en masse to vote in the election.
Also speaking, the Deputy Director, CSO Division, INEC Headquarter, Mrs Lakunuya Dorothy Bello,who noted that INEC had done a lot to educate the youth and the general public on importance of political participation and violence-free election, assured the youth that INEC was ready to ensure that the election is free and fair.
She appealed to the youth in the state to resist any enticement from politicians to be used to perpetrate electoral misconducts.
While giving similar advice, the Acting State Director, National Orientation Agency, NOA, Mrs Famuyiwa Olawumi said that the progress of Ondo state lies in the hands of the youth, if they can use their political power to vote but not fight in the October 10 governorship election.
The Director of Programmes Yiaga Africa, Mrs Cynthia Mbamalu, the Executive Director of Uppline Centre for Development, Mr Alo Martins, the Executive Director of The Special Breeds, Mr Jonathan Obatola and other speakers at the townhall meeting called on the youth in Ondo state not to sell their votes and ensure they decide their future through their votes.
Members of the public, who were listening to the programme live on radio, used the opportunity to ask questions and share their thoughts on how youths can be encouraged to partake in the election and subsequent ones in the country.