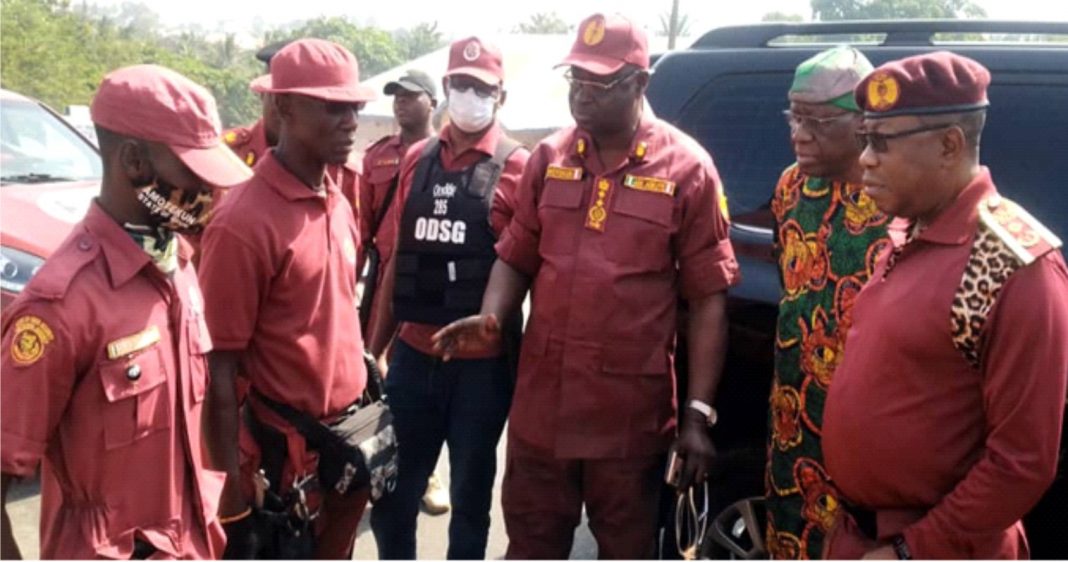 Less than 72 hours to Christmas celebration, the Southwest Security outfit Amotekun corps have taken steps to secure the Southwest states Nigeria.
To this end, the corps have commenced a 24-hour inter-border surveillance and patrol across Ondo, Oyo, Ekiti, Osun and Ogun States.

The Hope Metro authoritatively gathered that the steps were taken to forestall any form of crime or criminality in the region with the influx of people from Lagos in particular and some other parts of the country.

This is coming after a meeting held on Tuesday by the Corps Commanders of Ondo and Osun States, Akogun Adetunji Adeleye and Brigadier-General Bashiru Adewimbi, at Owena boundary town where they briefed their surbordinates on how to synergize and make the operation smooth.

Speaking with The Hope Metro, Akogun Adeleye noted that the joint patrol became necessary to protect the citizenry from criminals and commuters who would be travelling during the Yuletide.

Adeleye explained that the operation was the outcome of a joint meeting of all Corps commanders in the Southwest in a move to ensure criminals were not allowed to perpetrate any havoc during the festive season.

The Ondo State Corps Commander, who said the operation was a continuation of the Operation Clean up, disclosed that the patrol would be 24 hours and would last till the end of the Yuletide.

Adeleye further hinted that the state Amotekun have deployed about 750 officials to the 18 local government areas of the state.

He explained that they would review the operations after the Yuletide and design modes of providing security in inter-border lines.He said Amotekun officials will be stationed in Ore/Ogun, Iju/Ikere-Ekiti, Owena/Osun states brother lines among others all through the season.

According to him, the 750 officials deployed across the state are to provide security before, during and after the festive period.
Also speaking, Brigadier-General Adewimbi stated that they were poised to make the region uncomfortable for criminals.