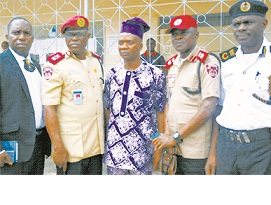 To ensure accident-free expressway during and after the yuletide, Ondo State Government has reiterated its determination to partner the Federal Road Safety Commission, FRSC.

Special Adviser to the State Governor on Transport, Mr Tobi Ogunleye declared this while receiving Zonal Commander of FRSC in charge of Ondo, Osun and Oyo states Assistant Corps Marshal, Godwin Ogagaoghene who paid him a courtesy visit in his office.

Ogunleye who commended men of the Ondo State Command of FRSC enjoined the FRSC boss and his men to see all road users as partners in progress.

Earlier, the Zonal Commander, Godwin Ogagaoghene who commended the support of the State Government said FRSC will deploy special  equipment like towing trucks and setting up of new camps in Ore and Ikare to forestall breakdown of law and order.

He noted that Ondo State being a transit state deserves more traffic control attention and sought the support of the ministry of transport in carrying out smooth operations during and after the yuletide.

Ogagaoghene who said FRSC operations cover only federal roads promised that his men will work to save lives as contained in the commission’s law.