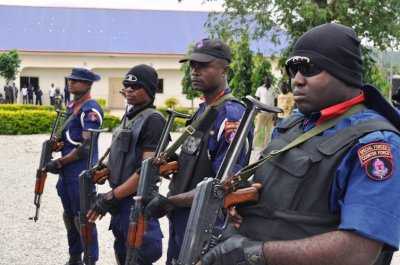 Nigeria Security and Civil Defence Corps, NSCDC, Osun State Command has deployed officers and men to strategic locations across the State to provide  adequate security ahead of Christmas and New year celebrations.

The State Commandant of the Corps, Agboola Sunday  directed Area Commanders and Divisional Officers across the state to identify strategic and vulnerable points in the state and deploy massively to ensure adequate security of lives and property before, during and after the yuletide.

Agboola   who  gave this marching order during December  strategic monthly meeting with Area Commanders and Divisional Officers said the end of the year period usually witnesses a lot of criminal activities, hence, there is a need for all personnel to be on their toes in order to smoke out criminally –minded people who are hell-bent on frustrating  the peace and tranquility enjoyed by the residents of Osun State.

He noted that  patrol teams and surveillance squads will be fully deployed throughout the period of celebrations, so all citizens can rest assured of security of their lives and property.

The Commandant further charged  the personnel  to strengthen their leadership capacity and operational strategies in order to be able to deal with various crimes associated with the end of the year.

While commending the officers for their resilience in fighting crime and criminality during the outgoing year, he urged them to tackle crimes  and all threats to national security head on.

He advised personnel to justify the trust reposed in the Corps by  members of the public.

He, however, appealed to members of the public to assist security agencies by providing intelligence that  could lead to the arrest of men of the underworld.

“Security is everybody’s business, be security conscious and when you suspect strange faces and movement in your environment, report to the nearest  security agency,” Commandant Agboola said.

He encouraged them to propagate peace, demonstrate love, forgive one another and be tolerant,  saying they are means of promoting harmonious coexistence with fellow citizens irrespective of religion , ethnic or political inclinations.