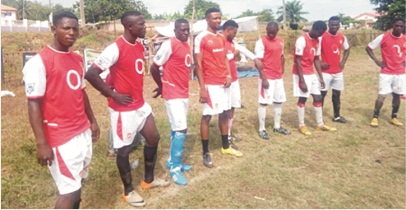 The Sporting Hope reports that the grassroot football decided at the Ijapo Housing field between the two  teams saw a beautiful footworks from both sides from the referee blast of the whistle .

The Cameroonian team displayed some football techniques with their highland defends, likened to the great German team.

Zambia however threw in their attacking fluency with their speed which was well curtailed by the well coordinated Cameroonian’s  rearguards.

The first half of the exhilarating encounter ended 0-0 goalless.

At the restart of the second half, Ages FC (Zambia) took the game to their opponent by mounting pressure in the opposing side ,which was resulted in a penalty appeal that was overruled by the center referee.

Cameroon on the other side were tactical enough to shrugged off the pressure and concentrated on the tasked ahead having known that a goalless draw will end their campaign in the competition.

Though, Zambia on their own knew  that a draw was enough for them to qualify for the semi final of the competition, they were tactically compact from the midfield to the defense.

Wrong call from the referee in the 88th minute however denied the Ijapo landlords qualification to the next level of the competition, as the line man had raised a flag for a cynical foul on the Zambia player but the center referee looked the other way.

Zambia players protested the referee decision, but the center referee stood with his decision by over ruling his assistant and  pointed to the center for a restart .

The lone goal scored by Cameroon was the decider of the game to the advantage of the former.

Other matches decided at the same venue saw Snippers FC South Africa pipped Ghana 2-0, though the winning was not enough for them to progress to the next level , as they had already lost two games. Nigeria thrashed Togo 3-0, in a consolatory game that took them nowhere further in the competition, while Guinea egded Senegal 1-0 to book their place in the Semi finals .

According to the organiser of the competition, the semi finals will be decided today (Wednesday) at the same venue.