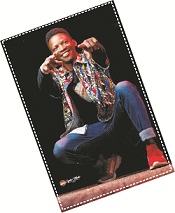 ‘I want to be a positive influence in show biz’

By Success Nlemchukwu
|
Comedy in a modern sense is any discourse or work generally intended to be humorous or amusing by inducing laughter, especially in theatre, television, film, stand-up comedy, or any other medium of entertainment.

Prior to this, a Lokoja based stand-up comedian, Poroye Oluwasegun popularly known an “Infinix” has said that he wants be a positive influence in the entertainment industry, having a headway against all odds.

Infinix, a native of Irele in Ondo State who joined the entertainment industry in the year 2016 has shared with Friday’s Extravaganza how he discovered his comedy talent, his journey so far and projections as a comedian.

According to him, he had a hunch for fun and funny stuff which all started from his primary school days, noticing that every content he created always hit people in a funny way, even when it was serious. “Although comedy was not really my line then, I had 100% passion for music. So I guess talent cannot be kept hidden”. He said.

Infinix, venturing into comedy was as a result of inspiration from different world topmost comedians from the likes of Mr Bean, Tyler Perry, Kelvin Hart, Alibaba and so on but majorly, he said his inspiration has been from God.

Infinix being a stand-up comedian having his first stage performance in 2016, he said: “I almost had a fatal stage fright. It was actually in a church (Living Faith Church) at Lokoja where there were thousands of people sited in the auditorium, and I have never performed in front of such huge number before.”

“What really gave me confidence was that I was sure of my content and I decided to flow in with my music first which amazed the crowd seeing a comedian doing music but after the tension, I did my comedy and that took me to a whole new level.” He added.

Infinix being a computer science student at Lokoja Federal University, made it known that he was able to strike a balance between his academics and his comedy career, doing none at the expense of the other.

Speaking on his parents perspective about his comedy career, he said: “My parents supported me, although it is kind of complicated, such that my dad supported music while my mum supported both.” He stressed that “My parents actually sponsored my first comedy show.”

Facing challenges financially, he beckoned of the top stars for help and support in the industry. With several performances, he has been able to solve the problem of stage fright which was one of his biggest problems.

Planning for the future, Infinix said: “I want to be a positive influence in the entertainment industry and I will advise my fellow upcoming artistes never to give-up.

Though they might not be getting all the attention or cheers needed right now, but trust me, it’s going to pay big time soon and the most important thing is to always be humble.”