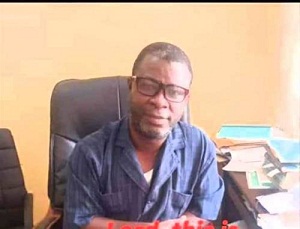 By Tola Gbadamosi  & Fasusi Martins, Okitipupa
|
Prof. Gideon Okedayo of the department of Mathematical Science, Ondo State University of Science and Technology (OSUSTECH)   who was kidnapped by unknown men last Thursday has been  found dead.

The Deputy Vice Chancellor of the institution,  Prof. Francis Igbasan, while confirming the incident lamented that he felt very sad and devastated about the story.

” I feel very bad. I  felt bad that I  have lost a colleague. A very vibrant professor of about 50 -years-old,  who has contributed a lot to the University “

”  And that is what we have been saying that government is not doing enough to protect lives and properties.”

Igbasan said it took  years to produce a professor,  most especially a professor of Mathematics of his type and so losing him in such a  circumstances is pathetic.

He called on government at all levels to rise up to the trend of modern crime and criminality which is ravaging the country.

It will be recalled that Prof. Gideon Okedayo  was kidnapped by unknown gunmen along Auchi – Igara road while traveling along with his driver.