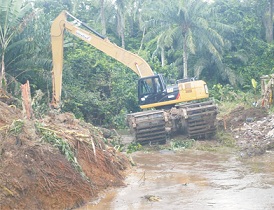 This was in fulfilment of its promise to dredge flood prone areas in the state.

The amphibious  excavator recently acquired by the State Government were seen working at Alade Idanre along Oke Mapo area of the town on Alade/Akure road.

The State Deputy Governor, Mr. Agboola Ajayi had led an entourage to Idanre to sympathise and inspect the level of damage done by the flood.

Agboola promised at the palace of Owa of Idanre Kingdom, Oba (Dr) Frederick Adegunle Aroloye to bring the excavator to the area to forestall the reoccurrence of such incident.

In his reaction, caretaker chairman of Idanre Local Government, Mr Jerome Akinsuyi  described the commencement of work  as a welcome development and lauded the Deputy Governor for keeping his promise.