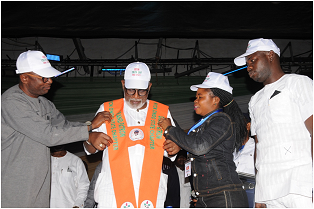 By Evelyn Omotoye
|
Youths, they say, are leaders of tomorrow, hence the need for any society that must grow to nurture youth properly, create enabling environment for them to thrive and train them to realise their potentiality  to become responsible citizens, useful for themselves and the entire society in order to raise it to an enviable height.

In this regards, every 12th of August as an International Youth Day (IYD) is an awareness day designated by the United Nations with a view to draw attention to a given set of cultural and legal issues surrounding youth. According to Wikipedia, the first IYD was observed on 12 August, 2000.

This year’s celebration of the International Youth Day in Ondo State took a different turn as the state governor, Arakunrin Oluwarotimi Akeredolu, SAN, alongside his deputy, Hon. Agboola Ajayi led members of the state government cabinet and many top government fuctionaries among other stakeholders in the state to commemorate the 2018 edition of the day.

The Adegbemile hall in Akure, the state capital was filled to capacity with various youth groups including youth corps members, students from the state tertiary institutions and various secondary schools in the state to interact and discuss the way forward in creating safe spaces for youths as well as rob minds with the government in order to chart a new course for them to find their feet in the scheme of things.

The Ondo State Governor while addressing the gathering noted that the theme of the event is apt in view of the important  need to place priority attention on issues concerning the youth, saying youth have important roles to play in the development of the nation. He charged the youth to explore windows of opportunities and key into the developmental agenda of the present administration in the state to have great ideas that will make a desired paradigm shift and become responsible leaders of tomorrow.

Akeredolu reiterated his administration commitment towards youth development, saying any responsible government  must give the youth whatever they deserve and assuring that  his government will continue to create spaces and opportunities for the youth to thrive.

The governor who restated his alliance with the new #NotTooYoungToRun Bill, charged the youths to contest for political leadership positions in the country, adding that they must all come up with new initiatives to challenge the status quo and promising to give adequate support for interested youths.

He also urged the youth to think positive and act wisely with whatever they do. “While the older people sleep to dream, you should see vision and have great innovative  ideas that would become impetus to good governance and socio-economic development of the nation”.

He implored them to abstain from using the various groups and confraternities to which they may belong for negative and detrimental activities. He added that their gatherings should be for development and productive purposes to themselves and the society.

The governor was at the occasion, inducted and decorated as the Grand Patron of the National Youth Council of Nigeria (NYCN) in Ondo State by the state Chairman, Comrade Esther Owoeye.

In his welcome address, the Commissioner for Youth and Sport Development, Mr. Saka Yusuf Ogunleye stated that  the issues of youth empowerment and capacity building have continued to take a centre stage of the Akeredolu’s administration policies and programmes.

This he said is borne out of the governor’s concern for the issue of youth joblessness and its negative consequences on the socio-economic development  of the state. He noted that the present administration in the state has adopted a multu-facet strategic approachin addressing the youth related challenges to ensure a sustainable youth empowerment process in the state.

Highlighting a number of measures and institutional framework which have been put in place to drive the process to include “the creation and strengthening of the state Attic Empowerment Centre in charge of Agro-business Centres at One, Epe, Isuada and Auga, YESSO under Multilateral Department of the governor’s office. 23 skill acquisition centres with at least one in each LGA,  Entrepreneural development programme, Micr-Credit facilities, Guidance and Counseling services for youth, Sporting and recreational activities, value reorientation and leadership  training for youth among others”, he stated.

Ogunleye added that the state government also leverages on the intervention fund from federal government youth empowerment initiatives and explore the intervention of development  partners as well as donor agencies such as UNDP, World Bank, UN Habitat and others.

The commissioner commended the state governor’ for his numerous efforts in creating spaces for the youth which according to him include moral and financial  support for the emergence of two of the illustrious youth as worthy ambassadors of the state on the platform of NANS and NYCN. He likewise mentioned that the appointment of some youth to political posts by Mr Governor is also commendable.

He therefore called on private sector, donor agencies and well meaning individuals with prospective youth empowerment and development to collaborate and cooperate with the government  in its quest to lift the Sunshine State into an enviable height. He also urged the youth to leverage on the windows of opportunity provided by the government for the socio-economic emancipation of the state.

Meanwhile, one of the guest speakers, the Special Adviser to the Governor on Public and Intergovernmental Relations, Mrs. Olubunmi Ademosu enumerated those avenues opened by the present government in the state and at the federal  level for the youths to explore and get involved in profitable engagements. She harped on the Npower scheme of the federal government as one of the major opportunities.

Ademosu equally challenged the youth to engage themselves with like minds that would add values to their lives and tap into the abundant opportunities presented by the present federal and state governments by taking advantage of their God given talents and skills to become self reliant and employer of labour in the country, to become real leaders of the nation without having a ‘godfather for connections’.

Also speaking, the President of Diplomat Leadership Institute,  Pst. Stephen Benjoel,  who spoke on the theme ‘Safe Spaces for Youth’ said the theme is apt and all encompassing and cannot be undermined, maintaining that governments should create spaces for the youth while asking other private bodies and non government organisations.to rise up and invest in youth development for them to grow optimally and take the society to an enviable height.

Noting that Nigeria is blessed with young minds with youthful ideologies, Benjoel however charged the youth not to give up on themselves but be focused, resilient, go for knowledge, be truthful and stay away from drug abuse and other social vices in other to breakthrough in whatever their hands find doing and make a meaningful impact in their generation.

Speaking with the newsmen, the Special Assistant to the Governor on Youth and Students’ affairs, Mr Banji Adewunmi charged the youth to key into the developmental measures  put in place by the governments at all levels to save spaces for the youth both now and in the future.

Adewunmi advised the youths on self development and for that of the entire society, assuring that the Akeredolu administration  will continue to sensitise them in relevant areas they need to be informed and create safe spaces for them on how to channel their restiveness and energy into a productive ventures.

Meanwhile, Comrade, Owoeye in her address,  commended the passage and assenting of the #Not Too Young To Run bill by the National Assembly  and President Muhammadu Buhari, saying the development is sure foundation laying to involve youths in the leadership of Nigerian societies.

She nonetheless implored home governments to make policies and programmes which will make the youth leaders inclusive and participants in governance. This she said is in order to meet the intention of this year’s IYD theme, which is for every government at all levels to create enduring spaces for the youths on the socio-political and economic sphere of each society.