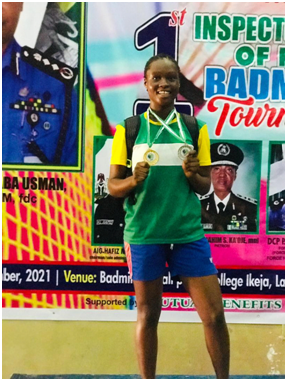 Ondo State born Badminton sensational player, Damilola Oyedipo has reignited her winning Racket to coast home with another Gold medal.
The 2019 and 2021 National Youth Games female number one player proved her superiority over others to win the most precious shield in the female singles open category at the first Inspector General of Police (IGP) championship.
She also added silver medal to her medals in mixed doubles open category, while her male partner, Philip Afolabi also won silver and a bronze in mixed doubles and singles men categories.
The championship was competed by all the paramilitaries in Nigeria and 10 invited states.
Ondo State Badminton coach, Tunmise Olalehin commended his players for doing the state and their families proud, saying they displayed high level of discipline which the state is known for.
He said Oyedepo has always displaying outstanding performance at both local and national championship saying she played with passion and the live of the game.
According to him, I advised her and other players to be more focus and continue to work hard to far in their career. Despite merging sports with education they were all doing well in both field, Damilola has never lost any final since her venture into the game.
Her level of determination is superb and above my own imagination, she won gold in a debut in 2019 National Youth Games in Ilorin, she defended the title this year at the sixth edition of the games, she came first at the National school games, as well in the South west games recently concluded in Ogun State.