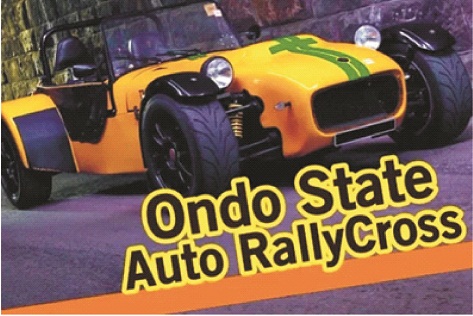 By Femi Atolagbe
|
Following the success recorded at the 2017 inaugural Ondo Auto Rally , the organizers of the Rally in collaboration with Ondo State Development And Investment Promotion Agency ( ONDIPA), set to begin the 2018 edition of the rally.

In a statement issued in Akure , the Ondo State capital, the state Commissioner for Information and Orientation , Mr. Yemi Olowolabi said the Auto Rally is one of the efforts at promoting tourism activities in the state , adding that the event would attracts more tourists to the state as it has become an annual programme.

He also added that the auto rally would be beneficial to the state and the people in terms of job creation and will boost the economic activities of the state particularly Akure , the state capital and Ilara-Mokin where the programme would take place.According to him ” There would be in flow of tourists and spectators into the state, hotels will be booked and those selling drinks and food will be patronised” he said.

The Information and Orientation Commissioner, stated that the rally will begin at Smokin Hills, Ilara-Mokin on Friday 16th November, 2018, where there will be bonfire night, cultural troupe and entertainment at the smokin hills golf resort and on Saturday, 17th November, 2018 the auto rally will kick start from the Governor’s Office, en route Government House,Obafemi Awolowo Avenue , Alagbaka, Akure by 10am.

Presentation of awards to the participants and entertainment of guests would follow at Gani Fawehinmi Arcade by 4pm.

Mr. Olowolabi therefore, enjoined the people of the state to come out to witness the second edition of the programme and urged them to cooperate with the organisers so that success would be recorded as it was in the first edition.