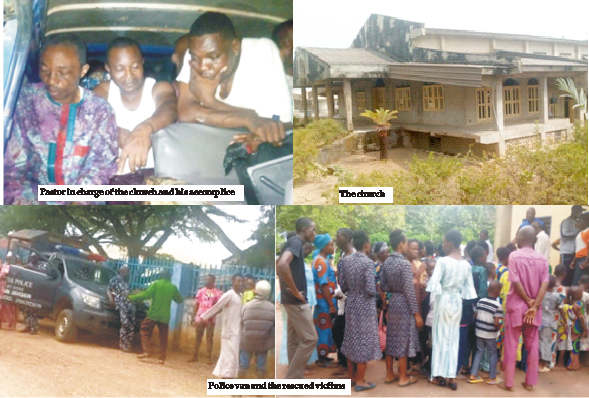 Neighbours living around the Whole Bible Believer Church also known as Ondo Church at Valentino area where many children, youths were rescued from its underground have continued to open cans of worms, as they vowed to stop its operation in the area.

When our reporter visited the area yesterday, stern-looking policemen were seen keeping vigil at the church and prevented some of the worshippers who turned up for the Sunday service from gaining entrance.

Our reporter observed that security men were strategically positioned around the church to prevent anyone entering the building.

Policemen stormed the church after 77 people comprising 26 children, eight teenagers and 43 adult members were rescued from its underground apartment and arrested the pastor and his aides.

Residents around the church lamented that they had earlier complained about the church’s wrong teachings and practices, making many of them to stop worshipping in the church without any action until last Friday.

They however expressed relief that security men have worked on the complaints of some parents who reported the case to the police in Ondo town.

One of the residents, Mrs Adeniyan Adenike said they were happy that the pastor and his cohorts were arrested and said members of the church have been very violent and they practice doctrines alien to Bible teachings.

“They will keep children here against the wish of their parents and beat them up if they dare try to take their children home. There were women who divorced their husbands to live here. No non member can enter the church. They don’t even honour the police. We are happy that they are no longer here.”

A middle-aged man, Mr Tunde Akiola who also resides in the street described the church as a very dangerous place which has been tearing families apart with false doctrines.

He described the activities of the church as against the teachings of Christ.

He said “the man who started the church had been chased away and they took over the church. What was happening here was not ordinary. What they were doing here were against what the bible says we should be doing.

“The pastor is known for drinking alcohol in the church. We even found used condoms inside the church when we went inside. A wife will leave her husband and be living here. They have caterers cooking for the people camped in the church. We are happy that the government is involved now.”

The Hope also gathered that the pastor of the church had earlier been charged to court in Ondo this year after one of his church members reported him to the police.

A source revealed to The Hope that the pastor was accused of anti-social behaviour and related accusations including keeping one of the children in his church.

The Hope further gathered that some of the church members, especially the young ones, supported the church against their parents in court, giving an indication that they were brainwashed.

When inquired about the court case, a source close to the church revealed that the case was struck out due to the intervention of an unnamed personality.

A woman who lives in the street expressed happiness at the latest development, stating that the church have been a menace to the street for a very long time with their dangerous activities and the intervention of relevant authorities was a relief for the people.

She said “we are very happy that this church is  sealed now. It has always been a problem for us in this street. If you walk pass this church and we dare look at them, they will throw stones at us.

“They will keep children here against the wish of their parents and beat them up if they dare try to take their children home. There were women who divorced their husbands to live here. Nobody can enter the church. They don’t even honour the police. We are happy that they are no longer here.”

Chairman, Christian Association of Nigeria (CAN) Ondo West Local government chapter, Rev’d Dr. Sunday Olowoniyi said the incident is a vivid representation of the challenges the body and the community are currently facing from churches that are not registered under any of the five blocs of CAN.

He said “we are aware of the development. Even though the church is in Ondo west local government, the man in question is not a member of the Christian Association of Nigeria. A woman was brought to my office on Friday.

“She narrated how her children are locked up in a church in the name of a programme. She described how she was thrown over the fence for trying to get her children. CAN taskforce accompanied the woman to the place but they were denied access.”

He continued that “so, I informed human rights officers and the police about the issue and they went there with the woman. Some of the police and human rights officers who went there were attacked and injured by members of the church. I went down to the church alongside security officers to monitor the situation. The police officers were able to gain entrance into the church after a long time and arrests were made. The children found there were released. The mother of the girl told me yesterday that the girl has written her common entrance examinations. The case has been taken to Akure for further investigations.”

Meanwhile, the United Nations Children’s Fund, UNICEF, has hailed rescue of 50 children abducted and held against their will in Ondo State.

A statement by UNICEF Nigeria Representative, Peter Hawkins, on the release of abducted children in Ondo State, said:”Children should not be targets of violence in whatever guise.”

“Violence against children is condemnable and we call on governments to redouble efforts to protect children against all forms of violence,,” the global humanitarian organisation said in the statement.

The terse statement read in full: “UNICEF commends the rescue of more than 50 children abducted and held against their will in Ondo State.

“Children should not be targets of violence in whatever guise. Violence against children is condemnable and we call on governments to redouble efforts to protect children against all forms of violence.

“A society’s health is measured by how it treats its children.”