Are you a gossiper? 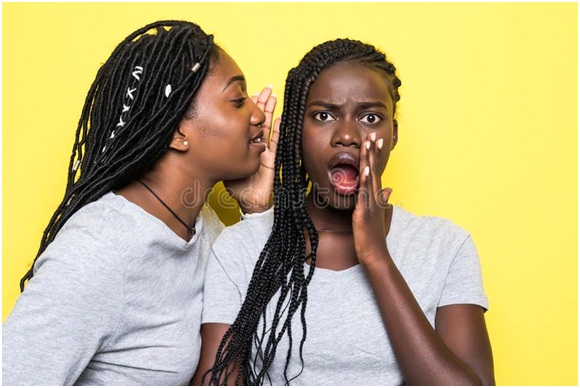 Gossip, according to wikipedia is an idle talk or rumour about the personal or private affairs of others. It is also called tattling.
It is being said, knowledge is power. Unfortunately, many people like to spread damaging information or intimate details about others, whether true or not. This is what is called gossip. People call gossip, dishing the dirt. Whatever it is called, people use gossip to hurt others in order to feel good about themselves, and to feel like they have power over others.
The most dangerous part about gossip is that it steals another person’s reputation. When you gossip, you are helping to destroy something extremely valuable.
Even though the temptation to gossip is powerful, you will always win when you choose not to use it. Even with all gossip, there is no way of knowing for sure what is true or not.
Gossip grows an audience. You simply being there listening to it adds to its appeal. If someone starts to tell you something gossipy, it is better to say I am sorry, but I don’t feel comfortable talking about this person when they are not here to defend themselves.Not only will you break the gossip chain, but you also will gain the trust of other people as someone who will not spread rumour.
If you should hear gossip about someone you do not know, you have two choices: allow the gossip to determine what you believe, or let your own personal experience determine what you think. The first time you have an experience with someone that is contrary to the gossip you have heard, you will be a lot more careful about spreading or believing gossip the next time you hear it.
Before you believe something you have heard about another person, ask yourself , does this really do any good for me to spread this information? Or am I just trying to be in the know?Is the information even true? Could I be hurting someone by telling this, even if it is true? If the person you are talking to is not part of the problem, or part of the solution, there is no need to tell them anything.
There is an old saying, stick and stones can break my bones, but words will never hurt me.That is not true. Being gossiped about can be extremely painful. If you don’t want it done to you, do not do it to others. In the end, it never pays to gossip.
Stay away from people who gossip to you because they will gossip about you. Do not associate with people who find such great joy in belittling others. Be very careful about what you choose to tell these people. If it is a close friend, you might consider saying how you want to stop spreading gossip, and that you would really like her help.
Gossips has less social power, individuals who are perceived to engage in gossips regularly are seen less liked and are not given social power.
Gossip also leads to bad karma, one of the effects of gossip is that it will always come back to you. When you gossip about someone, definitely others will gossip about you. It may be those you even gossip about, it may be those you even gossip with. The golden rule says”Do unto others what you want them to do to you.”
You might think what you are gossiping about is unimportant but the person about whom you gossip might think it is important.
Gossip leads to isolation, one might think this is impossible as you will have friends with whom you gossip. However you will be labelled as a person who gossip always.
It reflects badly on one’s social life. People resent gossips secretly and avoid them.
Gossips are not trustworthy, people easily lose trust in someone who gossips a lot.
When people talk to gossips, they hesitate before telling them anything important because they know that they will always divulge whatever intimate secret they are told.
Gossip soils ones dignity and integrity, since honesty is as important as someone’s life, you should maintain it. When you become the person who constantly gossips, you gradually lose your honesty. People do not trust and share their lives details with you. You will also engage in lying when gossiping.
Gossip hurt others, this is the worst effect of gossip. If you have been a victim of gossip or false rumours, you would know how painful it could be. Those that you gossip about feel embarrassed, disgrace, and ashamed even if they had not done anything wrong.
This people will hate whoever had gossiped about them.
Though gossip is used to spread information, aids social bonding in large groups and it is also used to check people’s reputation and behavior. But since the disadvantages of gossip bring or incur problems to the gossips and Victims, it is better to avoid it.

What ladies need to know about their bodies