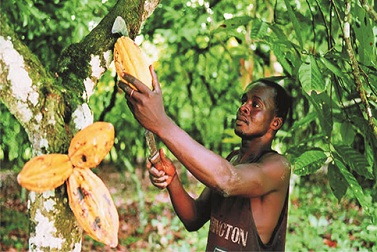 By Kehinde Oluwatayo
|
A cocoa farmer, Mrs Deborah Olawoye has identified soil infertility and old age of some of the trees of the crop as reasons why Ondo state lost its position as the leading state in the production of the produce.

Olawoye who said this in an interview with The Hope in Idanre noted that some cocoa trees planted sixty or forty years ago can no longer yield their strength as a result of old age.

The elderly woman said the story would have been worse if not that some people are cultivating inside the forest reserves, adding that  the soil in the place is still fertile.

Another thing that is responsible for low production in cocoa according to Olawoye is that the chemicals being used nowadays are not as effective as the ones used sixty years ago.

According to her, there must be a deliberate effort by all stakeholders to support the production of cocoa, if the state will regain its position as the leading state in the country.

She called on government to make quality chemicals and fertilizers available for farmers to buy to boost their production.

A cocoa buyer, Mrs Bosede Ayodele on her own said cocoa production in Idanre has never gone down attributing low production of the crop to loss of interest by other parts of the state.

“This is the business we do here. We have never been tired of doing it. In Idanre here, our production is increasing, but in some other parts of the state, they are not doing the work like before”, she stressed.

She expressed the fear that the situation may be worse since youths of nowadays do not have endurance to do farming work and want quick money.

Ayodele identified lack of proper processing as another problem facing cocoa production in the state.

She called on youths in the state to embrace farming, particularly cocoa production, adding that government should make fund available in form of loans to both buyers and farmers to boost production.