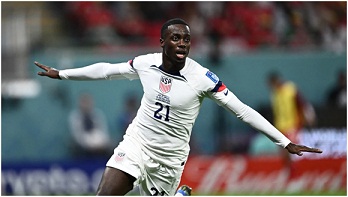 Luck ran on Timothy Weah ,the son of Liberia President and the only African footballer to have won Ballon d ‘Or , George Opong Weah on Tuesday scored in his first World Cup appearance for United States of America.

The feat his father could not achieved despite being a Ballon d’Or winner in his playing day.

Weah never had the opportunity to play at the biggest world football showpiece before his retirement.

Despite the outrage of snide and attacked latched at the George Weah by some African football enthusiasts over his son’s allegiance to USA, the feat will be a moment,Weah would never forget.

Timothy Weah, the son of the serving president of Liberia, George Opong Weah, opted to represent USA at the ongoing FIFA World Cup in Qatar.

Some of the critics said the action of Liberian number one family was a pointer to the high level of insensitivity often displayed by African leaders. While some said the players is an adult who has the right to choose for himself.

The family should not be blame for the choice made by his son, we have more than eight Nigerians playing for other countries at the ongoing World Cup.

Despite the absence of the ‘Giant of Africa’ Nigeria, at the football’s biggest showpiece going on in Qatar about eight Nigerians are  on parade for their respective adopted countries. Which include, Bukayo Ayoyinka Saka, born 5 September 2001, is a Nigerian-born English professional footballer who plays as a winger, left-back, or midfielder for the Premier League club Arsenal and the England national team.

Karim-David Adeyemi, born on 18 January 2002, is a Nigerian-born German professional footballer who plays as a forward for the Bundesliga club Borussia Dortmund and the German national team.

Iké Dominique Ugbo, born 21 September 1998, is a professional football player who plays as a forward for Ligue 1 club Troyes. Born in England, he represents the Canadian national team.

Noah Arinzechukwu Okafor, born 24 May 2000, is a Nigerian-born Swiss professional footballer who plays as a midfielder for Austrian Bundesliga club Red Bull Salzburg and the Switzerland national team.