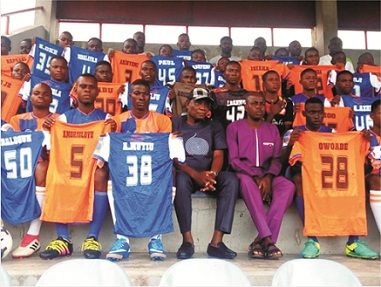 By Femi Atolagbe
|
The management of Rising Stars FC of Akure has unveiled 25 players that will represent the club in the 2018/2019 Nationwide League One (NLO) campaign.

The unveiling, which took place at the Ondo State Sports Complex, had the Chairman of the Ondo State Football Agency,Otunba Tajudeen Akinyemi in attendance,along with the officials of the team.

Otunba Akinyemi, after the unveiling said Rising Stars were not contesting in the competition to win it, but to develop the players.

The Chairman added that it was imperative to make sure that the players were playing competitive football to give them exposure and possible discovery.

According to him, “Rising Stars  is just to raise another set of players that can join Sunshine Stars, the mainstream team.

If we win the NLO league, that’s going to be a plus for us,but it’s not so important to us. What we can do now is to see if we can raise the next set of talents”

Rising Stars will play its first match of the season on Friday in the week 2 of  Group C1 of the NLO against Ajiroba Ooni FC at the Ondo State Sports Complex, after they were drawn bye in the first week of the season

Also, Akin Olowokere, Head Coach of team assured the management and fans of the team of improved and better performance this season.