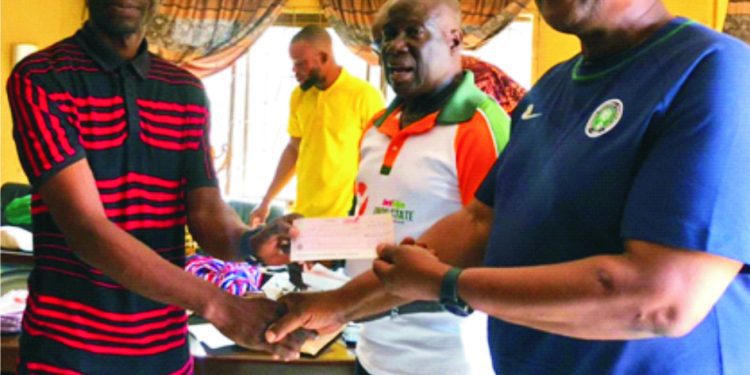 Ondo State FA Chairman, Otunba Dele Ajayi presenting a cheque to one of the participating teams

Barrack Eagles Football Club will on Monday trade tackles with Idanre United Football Club of Idanre at the opening match of the Super Eight of Ondo State Football League.

Muyi Stars FC of Akure will also battle Sarajo FC of Osoro in the second match of the day.

While Real Ifon of Ose will be up against Seaway FC Ayeka in the first match of the day two of the competition before Zion Warriors of Ondo will later resume hostility against Kakaraka FC of Ikare in the second match of day two match.

The chairman of the organising committee, Yomi Seriki in his welcome address assured all the participating teams that the second edition of the competition will be improved on.

Seriki said the ongoing league is not perfect, saying lots of lessons have been learnt in the cause of the games.

He congratulated the eight teams that made the Super Eight.

So far, we have been fair to all the teams and we are going to maintain same principle of fairness.

“All the teams must comport themselves peacefully throughout the competition, because we have started on a good note and we prayed we end it well.”

“As the organisers, we don’t want anything that will tarnish the image of the sponsor of the competition”.

The Nigeria Football Federation (NFF) executive member said the winner of the league will represent Ondo State at the Nigeria League one (NLO).

He charges all and sundry to join hands with the FA to develop football in the state.

He said: “the state FA has lots of program at hand, so if you see anybody that can sponsor football in your local government, let me know”.

Cheque of N100,000 and a pair of complete jersey were later presented to the each participating team in the Super Eight of the league.

“All we are doing is that we are contributing out quoter to reduce unemployment in the country.”