Why some food vendors
don’t eat food they sell 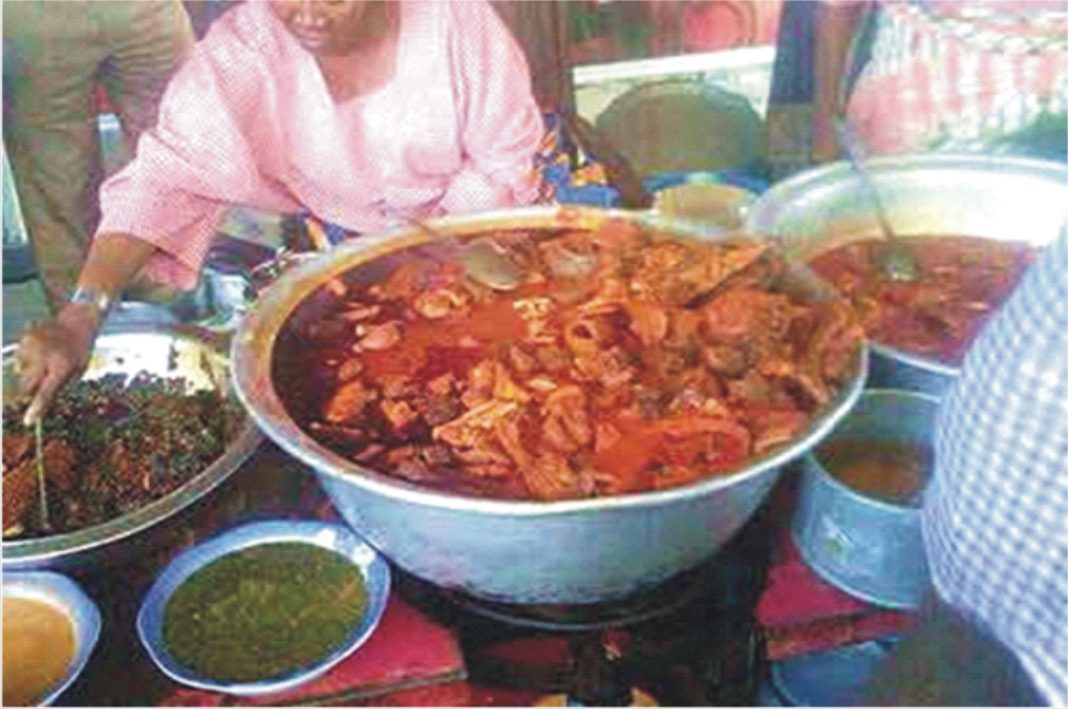 Food vending is a trade that is as old as time and they are many around us. They cater  for  the most basic of people’s need, feeding. There is hardly any street where a careful observer will not sight a food vendor. While some build structures where they sell their foods, others hawk them.

It is known to be a very lucrative business especially for those that have honed the craft of cooking.

The fact that every human being eats food provides a large market for the food seller.

Naturally, it should be assumed that the food vendor cooks for two people, herself and the customer.

However, there are indications that many food vendors do not eat out of the food they cook, it is no longer news that most people suffer diarrhoea, vomiting and nausea after eating contaminated food in their homes, restaurants and from food vendors or at parties because of the ingredients that were added to the food during preparations.

There have been, indeed, allegations of most food vendors, restaurant owners, and ‘Mama Put’ operators using illegal, toxic and poisonous ingredients to prepare tasty  commercial foods.

According to a previous media reports, some food vendors and caterers use paracetamol tablet to tenderise the meat they cook

However,  when the soup or meal is done after it must hàve gone through  questionable processes, the oily surface looks inviting and tantalising. One might not know the secret behind those palatable mouth-watering food people crave for.

The Hope spoke with food vendors and some individuals on this.

A food vendor at FUTA South Gate who preferred anonymity said her meals are 100 per cent  natural and chemical free.

“Although, I’ve heard rumours that some vendors use unhealthy means to make their meals, which are just unverified rumour,  the food I sell here is what I eat myself, and even my children, for breakfast, lunch and dinner. So if I’m making the meals with unhealthy substances, I won’t dare to give my children out of it.. Also I have been in this business for 12 years in this same spot and nobody has ever come to complain of stomach pain. ” she reacted.

Another food vendor who also doesn’t want her name in print said some other vendors use dangerous  ingredients to tenderise their food, add colourings to change the colour to make it look appetizing, give it a sweet soothing taste without considering the health hazard it might have on  the consumers.

“The main reason why some food vendors don’t eat out of their food is because they know the process and how the food was made, they prefer to risk other people’s lives but not theirs and over the years, there have been warnings that  these fake ingredients are dangerous to health when consumed but I guess our people won’t listen, because they are greedy and want to make excessive profit” she added.

Ibikunle Benson, a civil servant said  “I have had my suspicions over the years, in my almost 15years of eating out, I have never for once seen these food vendors eating  out of the food they sell, is it that they are not hungry or they don’t eat when people are there? Although there are rumors that they use unhealthy ingredients to make food, there are also allegations that some food sellers use dark powers and trick imaginations to make quick sales of their foods, probably that’s why they don’t eat out of the food, who knows? But I’ve been eating out for a long time now and I’m still healthy, I guess my immune system is strong both physically and spiritually.”

According to a mechanical engineer, Dada Omolayo, it  is only God that has been protecting him because he eats out every afternoon due to the nature of his job.

“What they use in preparing the food is actually none of my business, as long as it is delicious and I pray before eating, I’m good to go. It is only God that can deliver us from evil in this country. If even  highly spiritual men of God gets poisoned not to talk of people like me, I am just enjoying God’s grace” he added

In the same vein,  Dr (Mr) Hezron Agboola, a botanist said “the damaging effects of consuming rotten tomatoes and other rotten food ingredients are enormous and in fact, not instantly  but gradually. Four major organs (liver, kidneys, intestinal tracts and skin), responsible for eliminating toxins from the body will begin to diminish in function, and then the body’s immune system breaks down too resulting in illness. The organs involved in the role of detoxification begin to fail in articulation and function when these toxic substances overwhelmingly become too much for the body to detoxify.

“These rotten tomatoes are dangerous to health when consumed. We therefore implore everyone, particularly our women to desist from buying and consuming rotten tomatoes” he added

A nutritionist, Adedoyin Ifeoluwa said  “Some people think that rotten food ingredients, which are cheap can be consumed after washing and heating. This is not true as toxins cannot be washed or killed by heating because mycotoxins are heat-resistant.

“Mycotoxin is a toxic substance produced by fungi and it is capable of causing disease and death in both humans and other animals. They are naturally occurring toxins from molds which cause a variety of adverse health effects” he said