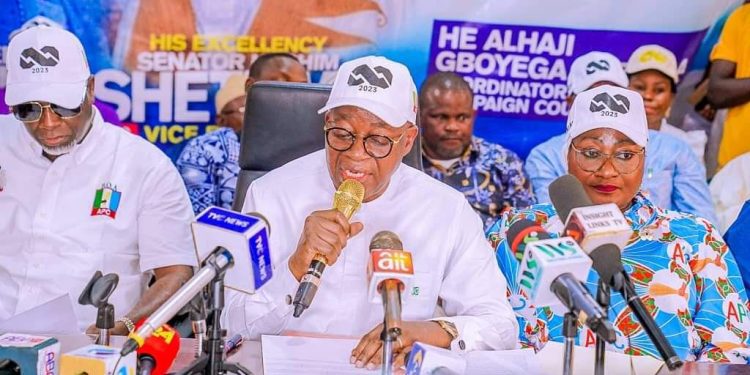 Former Osun State Governor, Gboyega Oyetola has promised to deliver over 1.5 million votes from the State for the All Progressives Congress, APC, Presidential candidate, Bola Ahmed Tinubu, in the February 25, 2023, presidential election.

Oyetola disclosed this at the inauguration of Tinubu/Shettima Presidential Campaign Council in Osogbo on Thursday.

Oyetola, who is the State Coordinator, Tinubu/Shettima PCC, also tasked the newly-inaugurated members to intensify efforts towards ensuring all round victory for the APC presidential candidate and his running mate and all the party candidates in the forthcoming general elections.

“No stone would be left unturned to ensure the emergence of Tinubu and Shettima, as well as all the candidates of the party in the National and State assemblies elections.

“The country is in dire need of a competent individual like Tinubu to build on the gains of the incumbent administration and drive the nation’s potential for socio-economic growth and development of the country.

“There is no room for experiment on the choice of next president at this critical time in the history of Nigeria, hence the need to elect Tinubu whose political pedigree, good, responsible and responsive governance antecedents are second to none.

“Tinubu/Shettima ticket is divine and it is worthy of note that the team is powered by tested and trusted hands as it offers a renewed hope in all sectors.”

In his address, Speaker, Osun House of Assembly, Timothy Owoeye affirmed that Oyetola will return for a second term as the State governor before July 5, 2023.

He also expressed confidence that Tinubu would also be elected the next president of the country.

He described the outcome of the July 16, 2022 Osun gubernatorial election as a temporary setback.