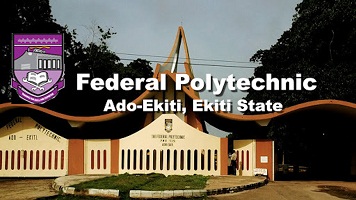 The management of the Federal Polytechnic, Ado-Ekiti, has said that 511 out of the total 13,677 will be graduating with distinction at its combined 18th convocation ceremonies.

The Rector of the Polytechnic Rector, Dr. Hephzibah Oladebeye, disclosed this in Ado Ekiti, during a pre- convocation press conference commemorating the 18th convocation and 45th anniversary of the establishment of the prestigious institution.

Giving the breakdown of the graduation list, the Rector, said the graduands which include those who successfully completed their Ordinary National Diploma (OND) and Higher National Diploma (HND) courses in periods spanning  2018/2019, 2019/2020 and 2020/2021 academic sessions.

Oladebeye said the institution had a total of 15,000 OND and HND undergraduates and 2,000 personnel, across academic and non academic strata that are contributing to the Polytechnic’s upliftment and development.

The Rector was enthralled over the granting of approval to the institution by National Board for Technical Education( NBTE) and professional bodies, for the running of 14 new courses at the Diploma and Higher Diploma cadres, saying this will  bolster the institution’s ranking nationally and globally.

The Rector added; “With this NBTE’s accreditation, our polytechnic now has 36 departments running various courses. This confirms that we are developing fast and well positioned to offer qualitative education to Nigerians”.

He said the university had sealed a deal with the Adekunle Ajasin University, Akungba Akoko, for the running of degree courses in 11 academic areas, while also having affiliation with the Federal University of Technology, Minna, for degree programmes in some certain specialties.

He said the institution has established Adopoly FM to transmit news that will add value to the host community and the state, as well as generating employment and revenue for the citizens and the Polytechnic.

He revealed that former Lagos State Governor and Minister of Works, Babatunde Raji Fashola and the Ooni of Ife, Oba Adeyeye Ogunwusi and others will be honoured at the ceremony for their contributions to national development and humanity.