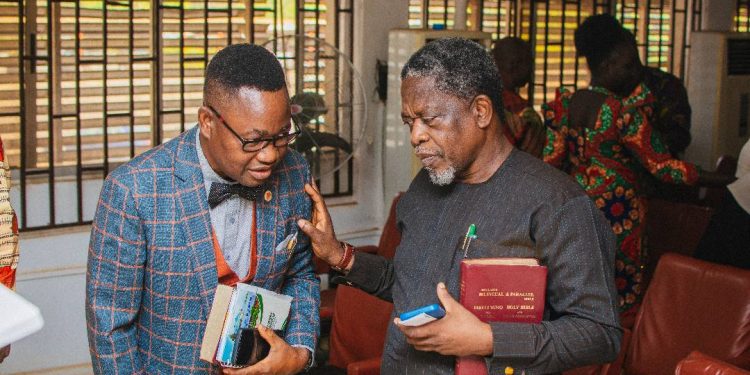 Ondo State Commissioner for Finance, Mr. Wale Akinterinwa has charged the staff members of the ministry to continue with the spirit of oneness in giving their best to the ministry as their Jerusalem in this new year.

The commissioner gave the charge at the annual prayer meeting with the workers of the ministry today.

The occasion which was used to pray for the sustainability of peace being enjoyed in the state and the nation was highlighted with praises and songs by Gospel Singer, Envagelist Tolulope Adelegan, who ushered workers of the ministry into new year.

He enjoined them to do their work consciously just as he said that they should be loyal to the government and the authority of the ministry and guide their utterances against the ministry’s image.

While urging them to pray and wish others in the ministry well in this new year for them to witness progress in their endeavours, Akinterinwa appealed to them to take good care of the ministry’s equipment in their care.

Akinterinwa, who called on the staff to dress properly and decently to work always tasked them to improve on the discharge of their duty.

“Whatever you have done in year 2022 do it better while the one you have done well improve on it. If you don’t improve on your weakness that means you have not changed or improve your way of doing things ” he said

Earlier in his prophetic declaration for the staff, the Permanent Secretary of the Ministry, Prophet Jide Ekpobomini, said the ministry, the state and the nation will witness healthy situation and abundance to better lots in the new year.

While seeking for God intervention to put an end to insecurity in the country, the permanent secretary said God is never a destroyer just as he attributed destruction as a result of insecurity to hand work of satan as destroyer.

Speaking with journalists, a staff of the ministry, Mrs.Funmilayo Ayodele-Adekanbi expressed joy to God for giving them the opportunity to witness annual prayer meeting, pledging to put more effort and commitment in the discharge of her duty.

He commended the Governor Akeredolu for fulfilling his promise on the payment of salary arrears of workers in the state.

“We appreciate Governor Akeredolu for putting joy at our various homes by paying all salary arrears including the December arrear as he promised,”