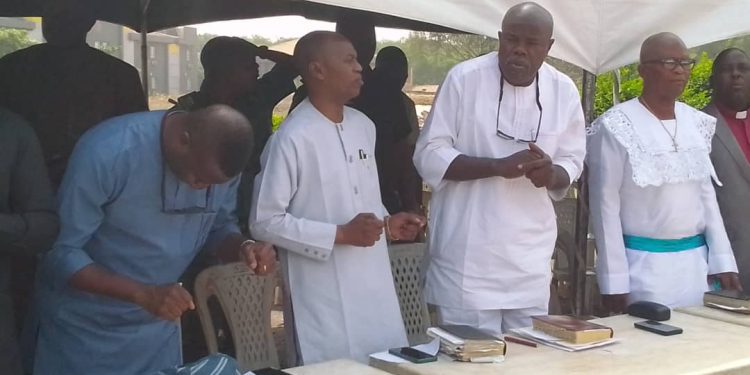 Ondo State House of Assembly has assured of its resolve to continue to prioritize the welfare of staff and members of the State legislative arm of Government for optimal performance.

The Speaker, Bamidele Oleyelogun gave the assurance while addressing the Assembly members and staff at the annual prayer meeting held at the Assembly complex in Akure.

He said it was an opportunity for legislators and staff of the State House of Assembly to converge and thank God for seeing year 2023 despite the various challenges that surrounded year 2022.

Oleyelogun commended lawmakers and staff of the state Legislature for their commitment towards smooth running of legislative business in the State.

“We have been able to ensure that over 80 percent of the State House of Assembly Staff had participated in various training within and outside the State”.

The Speaker assured of the 9th Assembly’s commitment to staff development even as he urged them to be more productive this year.

He specially thanked Governor Oluwarotimi Akeredolu for the approval of recruitment of Staff into various offices in the outgone year, adding that case had been made for filling of more vacancies while a good number of existing casual staff will be favourably considered.

He equally applauded the Governor for the payment of salaries, running grants and some outstanding allowances of workers in the State .

In his welcome address, the Clerk of the House, Jayeola Benjamin thanked God for his infinite mercy over all the Honourable members and Staff appreciating the leadership of the House for being Workers friendly .

According to him, 30 vacancy were filled last year with the consideration of some of the Casual workers who have been working for years, including payment if backlog allowances, approval of trainings and other calendar programmes.

The Clerk said he looks forward for more robust relationship in the new year, appealing to the Staff to replicate the gesture by ensuring all hands are on deck to achieve the set goal.

In his Words of exhortation, Rev’d Peter Akinrujomu who spoke on a topic “Correct yourself from the mistakes of others”, admonished people to learn from the history and scripture so that errors of the past won’t repeat itself.

Quoting from the Bible in Romans chapter 15 vs 4,he emphasized that people should not wait until bad things happen, but rather get the best out of life by learning to correct bad deed.

“Have a good mentor, don’t go the way of the wicked, but go in the path of righteousness and let God lead you.Look back into 2022 and correct errors made, unsure a new beginning and adjust where necessary before it is too late”, he admonished .

Highlights of the prayer meeting include, praise and worship, bible lesson read by the Speaker, prayer for the State, House of Assembly members,Commission, public service among others.

The Chairman, Parliamentary Staff Association of Nigeria (PASAN), Comrade Oluwafemi Helen commended the leadership of the House for prioritizing workers welfare assuring of total support and cooperation towards getting a better result this year.