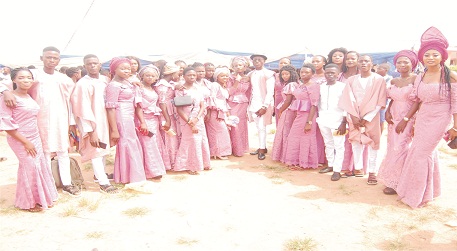 By  Bisi Olominu
|
Old students of Akure Secondary Commercial School have been urged to contribute meaningfully to the development of the school.

The school principal, Comrade Dayo Adebiyi made the clarion call during the prize-giving day and valedictory service held for the graduating class of 2019  at the school premises.

His words: ” My special appeal goes to the old students to come over to Macedonia and help us. If the development of the school is left in the hands of government alone, there cannot be appreciable progress. Akure Secondary Commercial School is the foremost secondary school offering commercial subjects in the whole Ondo State.

” Gone are those days when Typing Pool was filled to the brim with typewriters which were the instructional materials in vogue then. Today, computer sets have taken the place of typewriters. While all schools are trying to adapt to the new system, this school has not found its feet.

” While all its contemporaries among the six oldest schools in Akure like Aquinas, Oyemekun, Fiwasaye, St. Louis and C.A.C. can boost of standard computer labs with functional computer sets, printers and WiFi for proper teaching and learning of ICT curriculum, our school does not have an environment that cab be recognized as a computer laboratory.”

He thanked all the old students who had heeded  the clarion call, saying that their little efforts were recognized.

” I want to thank the 1976 set and 1979 set that are presently putting up a modern sick bay/health centre and a befitting 10 room toilet facilities in the school. I also thank Rt. Hon. Kenneth Olawale who used his connection to the renovation of the school some years back”.

The Royal Father of the day, Olu of Owode, Akure, Oba S.I. Fapohunda who happens to be an old student of the school promised to heed the clarion call and contribute his quota to the development of the school.

According to him, all the students who passed through the school and are now in high places should see the development of the school as a priority and should know that east or west, Akure Secondary Commercial School moulded them to become somebody in the society today.

Also speaking, the Chairperson, Chief (Mrs) Olu Olujohungbe, a former student of the school lauded the principal for doing a good job in the school.

” The Principal as a former student of the school, I don’t expect anything less than perfection from him. He has demonstrated good leadership and I promise that many of us will join him to uplift our school.”.

The outgoing Senior Prefect, Master Nwogba Philip in his valedictory speech lauded all the teachers for their efforts to make them someone in life.

He added that since being in the school, students have been treated like their own children, praying that God will reward them bountifully.

The Senior Girl of the school,Miss Oyewande Bolanle commended the school teachers for their efforts on the students, stressing that for ever the outgoing students and those coming behind will be grateful to them.