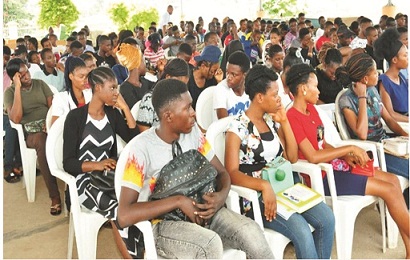 From Sade Adewale, Ondo
|
Newly admitted students  of the Federal Polytechnic, Ile-oluji (FEDPOLEL) have been charged to work hard and be dedicated to their studies, so as to  excel in their academic pursuit.

The Rector of the institution, Prof. Adedayo Fasakin stated this  in his keynote address at  the opening ceremony of  a 2- day orientation programme organized  for the 2018/2019 National Diploma (ND) students held at multipurpose hall of the  institution  in Ile-oluji.

Fasakin said that the orientation programme for the third set of full-time ND  students  was designed to give them the needed information and tips that will make their  stay in the polytechnic successful.

He explained further that the programme was planned to provide the students with the necessary information on the polytechnic’s  internal mechanisms and machineries of operations, and the rules and regulations of the school.

He posited that it will also guide them on   how  to settle down as soon as possible in order to concentrate  on  their studies.

Fasakin added that the school is determined to build a smart generation of students who will be good ambassadors of the nation  in the nearest future.

The Rector equally informed that the collective efforts of the polytechnic’s pioneer staff led to the establishment of five academic programmes which include  Accountancy, Computer Engineering, Computer Science, Electrical and Electronic Engineering and Statistics.

He further hinted that the efforts of the staff also resulted in the accreditation and approval of these programmes by the National Board for Technical Education (NBTE),leading to the subsequent admission of the pioneer students in  the 2016/2017 academic  session.

Fasakin noted that the doggedness of the Management coupled with the commitment of the staff of the institution have also led to the successful completion of the first and second academic sessions in recorded time.