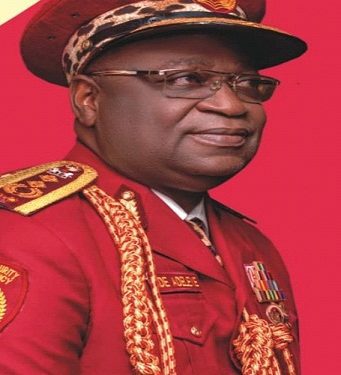 Commander of the Ondo state Security Network Agency codenamed Amotekun Corps, Akogun Adetunji Adeleye has said that the corps duty during February election  is to ensure that the state is safe for people to carry out their socioeconomic activities unmolested.

“That is the position of Amotekun irrespective of any political party, we are not involved in partisan politics.

Akogun Adeleye dropped the hint in an interview with The Hope in Akure , yesterday.

According to him, “Despite the climax of the forthcoming election, we are not involved in electioneering campaign or monitoring.

“All we are saying is that this people are residents of Ondo state, they deserve to be adequately protected, that is our position.

“Don’t forget that there were two programes that came on simultaneously in   November  2022.

“We had the Osun boarder patrol as well as the operation “Gba’le Gba’ko’ which were aimed at combing the forests, dislodge criminals and also instill confidence in the public that the urban centers are safe for socio economic activities.

“This proved to be one of the best of our activities as we were able to deliver to such an extent that several culprits and criminals both in bushes, highways and cities were arrested and some of them are being prosecuted as we talk and those that were investigated and without questionable characters were left off the hook.

Speaking further, he said “You will realise that during the ember period, there were no Kidnap case in the metropolis and even in the boarder areas.

“We turned the heat on Kidnappers to such an extent that they don’t have filled day to negotiate.

Now  that  the ember period is over, we are gradually withdrawing our men and tactically changing our strategy and that is the situation on ground now.

“We  the management of Amotekun decided to withdraw our men from some of those places and we are changing strategies also to guarantee  the security of lives and properties within the state and in the forest.

Don’t forget that the law setting up the corps is clear and it says  we  complement the efforts of all security Agencies and we collaborate in the operations with the Police, the Army, the DSS and the Civil Defence.

We are not under pressure from any quarter, we are only changing strategies for better service delivery.

” These men were out  there 24 hours for 90 days  and I think they deserve some rest. But while resting, they still maintain strategic security surveillance and operations in and out of the local government areas.

“Akure as state capital, as we talk, despite withdrawal of some of our men, we still maintain so many control points for security of people of the state, he explained.