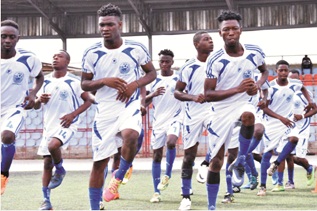 By Femi Atolagbe
|
The maiden Bet9ja Ekiti Football league has kicked off at the Oluyemi Kayode Stadium in Ado-Ekiti with 60 teams poised for honours in the competition.

Preliminary matches would last for only 60 minutes in a bid to prune down the number of teams for the main league stage.

In the opening match Moyero FC that has Ikere Ekiti as their proposed home ground outplayed Paul Omotoso FC  with a 3-0 defeat as spectators were treated to exciting football artistry by the Lanre Moyero-owned side.

Preceded by the draws which earlier took place at the same venue the opening  match came to life right from the blast of the referee’s  kick-off whistle as Moyero FC’s display drew applause from spectators.

But for some wasteful efforts in the opponent’s vital area Moyero FC could not make their dominance count as the first 25 minutes ended goalless.

After the 10 minutes break the Technical Adviser Bobola Akinfolarin and his crew ringed the changes and yielded instant result as new boy, Sunday Nwogu nodded home off a Tunde Awaga cross to register the first goal of the competition.

Omotoso FC side but not after Ojolowo Olanrewaju had earlier missed a penalty as the match finished 3-0.

Speaking after the match the chairman of the team Lanre Moyero commended the team for their efforts but insists their is still much to do to advance to the league stage where the overall winners will apart from the trophy and the prize money also have the opportunity of qualifying for the National Division three playoffs.

Moyero FC will now await their opponents in the second round to advance to the league phase where all the branded teams will play on home and away basis.