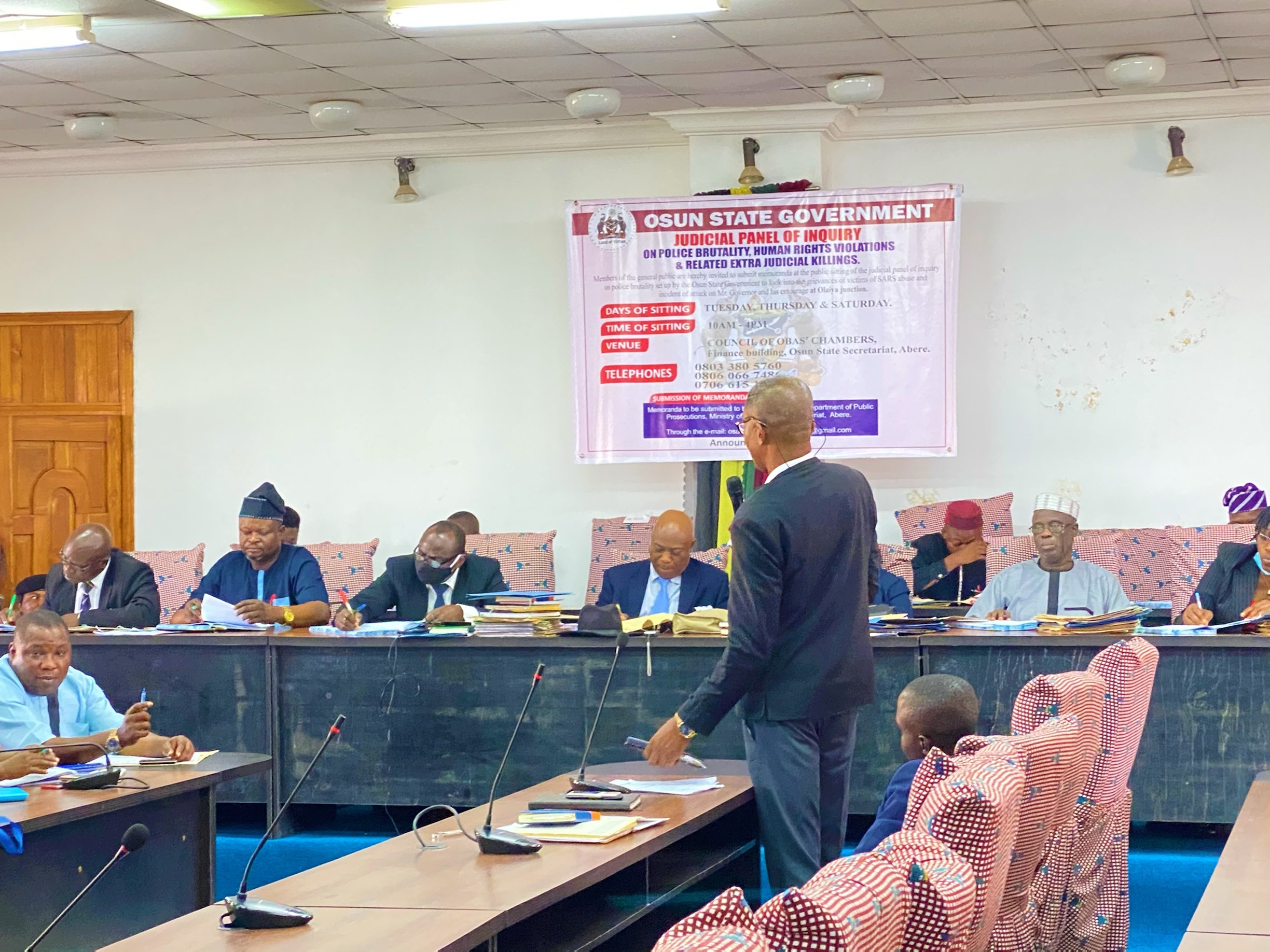 Osun Judicial Panel of Inquiry on Police Brutality, Human Rights Violations and Related Extra Judicial Killings has struck out a petition filed by Mr. Taiwo Segun against the police for lack of diligent prosecution and gross demonstration of unserioussness.
The panel also disclosed that it had received two fresh petitions in addition to the 30 it has been hearing so far.
This is even as the counsel to the respondent, Nigeria Police Force, Osun State Command, Officer in-charge Legal, Francis Baokun Osei, lauded the panel for being magnanimous to parties involved and for continuously upholding fair hearing since the inception.
Striking out Segun’s petition at the proceedings, the Chairman of the Panel, Justice Akin Oladimeji (rtd.), said the decision was necessary in view of the gross disrespect displayed by the petitioner and the prosecution counsel.
He expressed strong displeasure at the attitude of the petitioner and his counsel, which according to him showed that the petitioner was not ready for the case.
“The petition was struck out based on lack of diligent prosecution. When you file a case, you must attend to it. If you file a case through a lawyer, it is not compulsory that both of you must appear. What is important is that the lawyer must be present.
“When the case is slated for hearing, and neither the lawyer nor the petitioner is present, then the Panel can exercise its discretion to either adjourn or strike it out.
“This particular case was struck out because neither the petitioner nor the counsel was present when the case was called for hearing at the last adjourned date; and it was at the instance of that same lawyer that the case was slated for today.
“And when it came up this morning, neither the petitioner nor the counsel was present to attend to the case. In such circumstances, the opposing lawyer applied that the petition be struck out and the panel had no option but to strike out the petition”, Oladimeji added.
Justice Oladimeji however appealed to all petitioners to be more diligent and committed saying, “my advice for those that have petitions before the panel is to sit tight and do the necessary thing to push the petition for proper prosecution”.
Reacting, the Counsel to the Police, Officer In-charge, Legal, Osun State Command, Barrister Francis Baokun Osei, applauded the panel for being magnanimous to all parties involved in the proceedings.
He expressed satisfaction at the court decision to strike out the petition, which he described as a round peg in a round hole.
The five petitions heard on Friday were: OS/JPIPB/001/2020 Alhaji Ayo Dauda Adigun & 1 OR versus Commissioner of Police, Osun State; OS/JPIPB/006/2020 Elusanmi Kolawole versus Commissioner of Police, Osun State; OS/JPIPB/18/2020 Mr Olaide Olaosebikan & OR versus Commissioner of Police, Osun State and OS/JPIPB/23/220 Mr Taiwo Segun & 1 OR versus Commissioner of Police, Osun State.