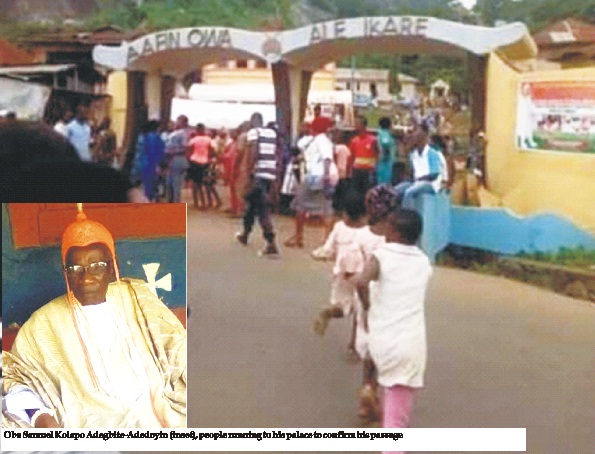 A hush fell on Ikare-Akoko yesterday as words went round that Owa-Ale of Ikare Akoko, Oba Samuel Kolapo Adegbite-Adedoyin has joined his ancestors at the age of 85.
The Hope reliably learnt that the monarch passed on early yesterday at his palace located at Okorun area of Ikare after reigning for 48years.
He was the 17th Owa Ale.
Although the palace is yet to officially announce his demise, it was learnt that the revered monarch died during a brief illness.
Mournful mood pervaded the atmosphere at the palace of the Owa Ale when The Hope correspondent visited yesterday thus confirming the passage of the monarch.
A legal icon, Oba Adedoyin, was said to have taken ill some couple of days before his passage.
A palace source who confirmed the news to The Hope described as true that the monarch has joined his ancestors but the people were keeping to the tradition in announcing this.
The Hope further observed that all chiefs in Iyometa Quarter and many residents were seen discussing in hush tones the development.
At the time of the visit, the trees in the palace signifying the passage of an Oba have not been cut in line with the tradition.
This The Hope gathered might not be unconnected with the fact that the death has not been officially announced.
Until his death, Owa-Ale was the President of a group of 130 Crown Obas and member of the State Council of Obas.
When contacted, the Olona of Ikare, High Chief Rafiu Okunade said official pronouncement would only be made after necessary traditional rites had been carried out in line with the community’s norms.
The monarch, who has one of the best stocked Law libraries in Ondo state, was one of the state few prominent indigenes who led the struggle for the creation of the state in 1976.
Oba Adegbite Adedoyin was born in 1935, two years after the death of Saint Moses Orimolade, the founder of Cherubim and Seraphim Church who was also from Okorun area of Ikare.
His reign would not be forgotten as he used his connections as a famous legal practitioner and the first educated Owa-Ale to facilitate establishment of more than eight secondary schools between 1978 and 1982.
Oba Adedoyin who was the only child of his late mother, Mama Janet Omotola Adedoyin, at various times attended Ebenezer A/C school, Ikare; Victory College, Ikare and was a classmate of famous Nigerians like late Chief Gani Fawehinmi; Afenifere Secretary, Basorun Seinde Arogbofa.
He studied Law in the United Kingdom before he returned home to ascend the throne of his forefathers in 1972 and was president of the former lay President of African Church worldwide.