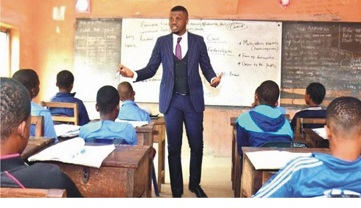 By Josuha Aderibigbe, Taiwo Samuel & Teniola Ayomide
|
As schools across the  country  are under lock and key due to the  coronavirus pandemic, teachers in private schools have lamented non-payment of  their salaries by their employers.

The teachers, who spoke with The Hope, revealed that schools were almost rounding up  the term before government declared that all academic institutions should be closed, adding that school proprietors had used the opportunity to deny them their salaries despite the fact that most of the students had already paid school fees.

Some of the teachers shared their thoughts and how they have been able to survive.

A private primary school teacher, who simply identified herself as Mrs Folakemi, told The Hope that ever since the school closure, she has not been paid a dime by her employer.

She said that she has  been surviving on her savings and the token she got from  home lesson.

She appealed to the  government to come to their aid by extending its palliatives to them.

Mrs Olutola Kehinde, who teaches in a private secondary  school  told The Hope that she has been feeding on her little business to survive.

Another  teacher,  Mrs Folorunsho  said: “I am  coping by God’s grace and the full help of my beloved  husband, during this  coronavirus  pandemic period”.

She however noted that she couldn’t blame her employer because the students have refused to pay school  fees ever since the lockdown started.

Reacting to this, the President of National Association of Proprietors of Private Schools (NAPPS) Chief Ijidakinro Derrick  who said the issue of salary is a private arrangement between the proprietors and their teachers said it was due to the impromptu holiday which they did not plan for.

He said he had held   meetings with chairmen of the association in  local government level and  observed that those who have reserves have been paying, some  gave soft loans till they will resume, some paid half salary while some could not pay.

He said:” things are very hard in the country, we can only appeal to them, as at the time schools were shut many students were yet to pay their school fees, some paid half.

Ijidakinro also appealed to the State government that palliatives being distributed in the state be extended to the teachers in the private schools so as to cushion the effect of not being  paid .

“After all, the private school proprietors are also helping the government in one way or the other to decongest the labour market and the unemployment in town and the teachers too are not at fault as they want to make themselves busy by doing something irrespective of what is coming out of it,” he stated.