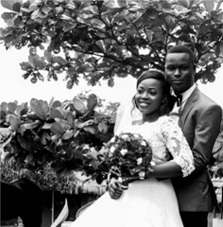 By Kemi Olatunde
|
Anyone who is passionate about the things of God receives the best from Him. For Toyosi, having Damilola as her all in all is a definition of a dream come true and answered prayer while to the groom, Toyosi is another dimension of God’s favour as she fits perfectly into his definition of my desired wife.

The duo were tired of having separate hearts; they wanted their hearts to beat as one, no wonder they never left any stone unturned just to ensure they walked down the aisle with themselves.

One good thing about this couple is that they both attend the same church and that was why The Redeemed Christian Church of God (RCCG), Faith Terbanacle, Ondo Province one, venue of the solemnisation of Holy Matrimony between the duo was filled to capacity especially with a large number of youths particularly from RCCG Power of Jehovah, Young adult and Youth Church, Youth Province 3, as they witnessed the ceremony recently.

Family members, friends and well wishers too were not left behind as they joined the celebration train gaily dressed in good attires.

Although, the couple were the celebrants of the day, but they both caught the fancy of all in their dressing which could best be described as modest to the core, thus illustrating a good example of good Christians’ look especially on special occasions.

Speaking in a sermon titled; “Bringing down God’s blessings upon your home”, the couple’s Pastor, Ademola Folorunso while congratulating the couple and their families on the occasion, expressed appreciation to God for the reality of the day.

While speaking extensively on the topic, he noted that it is very important that couples have informed knowledge on their coming together which according to him is for a purpose.

The cleric explained that their vision for their home must be actualised hence the need for them to plan towards their purpose saying ” there should be a plan to achieve your vision.”

He cautioned them against planning without involving God through prayers and however stressed the need for them to appreciate themselves at all times.

Guests were later treated to a sumptuous meal accompanied with various assorted drinks at a wonderful reception which took place at the multipurpose hall of Federal University of Technology, Akure.