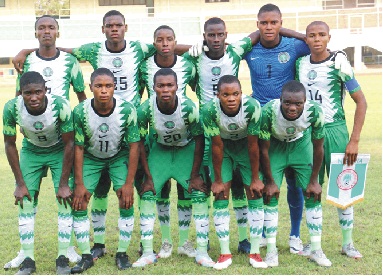 Golden Eaglets coach, Fatai Amoo has blamed his team’s poor performance in the ongoing West Africa Football Union U- 17 tournament in Lone , Togo on change of pitch.
Golden Eaglets have loss 1-0 to Ivory Coast in the first Group B match, before played a 1-1 draw with Ghana Black Starlets in the second match .
The Eaglets coach, Fatai Amoo said the last minute change of the venue of the opening match from astro turf to natural grass pitch affected his team.
While commending the team for their performance against Ghana which he said showed great improvement from the first match, Amoo said that the first match was an eye opener for the lads.
“Actually, the first game we played, the Nigerian boys were jittery and there is stage freight. It was their first time of coming out to play.
“Again, I did not mention it all along, we have been working on artificial turf, syntactic pitch. For the two months that we have come together. It’s been astro turf we have been working in.
“When they saw the first game, after we lost the game, we went back, we made corrections and they promised themselves that they are going to come out and play.
“Even in draw, I am delighted that my boys showed they can really play given the opportunity.
“Sincerely speaking, we had the upper hand when it comes to creating chances in this game.
Immediately we started the game, we really showed we want to win the game and I think if we had won this game it’s not by fluke or by luck. It is through the effort the boys put up in this very match,” he said
It was gathered that the team were scheduled to play at Stade Municipa which is Astro turf only for the organisers to shift the game to Stade Keige on the match day 1 which is natural grass.
The team was never aware of the change in venue until during prematch meeting on the match day
This, “affected our players in the first game, but the boys played better in the second match having trained on natural grass prior to the game.”
Without recording a win in two matches, the Golden Eaglets are hoping that Ivory Coast would do them a favour by beating Ghana by at least 2-0 for them to book their place in the semi-final of the tournament.
The Fatai Amoo tutored lads played two matches, lost one and drew one in Group B made up of three teams – Nigeria, Ivory Coast and Ghana.