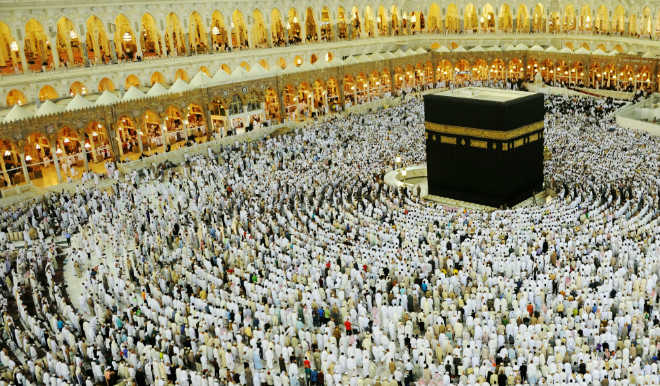 By Fatima Muraina & Chris Chimezie
|
One hundred and twenty seven intending Ondo Muslim pilgrims will today be airlifted from the Ilorin International Airport to Saudi Arabia for this year’s holy pilgrimage.

The intending pilgrims which consist of 72  men and 55 women,  yesterday left Akure for Ilorin, Kwara state where they will be airlifted.

at a farewell ceremony organised for the 2018 Hajj pilgrims Ondo State Governor, Arakunrin Oluwarotimi Akeredolu (SAN)  admonished them to shun all criminal acts capable of tarnishing the image of the state and the nation while performing their religious rights at the holy land.

He enjoined them to adhere strictly to the rules of their engagement in the Holy Land.

The governor, while stressing the need for the state contigents to be good ambassadors of the state in Mecca, urged them to pray fervently for themselves, the state and Nigeria in general.

“You are enjoined to conform to the laws of your host country and shun any conduct that can put your name, the image of the state and Nigeria as a whole in disrepute.

“You must resist the temptation to carry hard drugs or prohibited goods to the Holy land. The attributes of honesty and discipline which are enshrined in the Holy Quran must be conspicuously displayed in your performance of Hajj”, he said.

Akeredolu urged the officials to discharge their responsibilities with the fear of Allah while the pilgrims should obey the officials as dictated by law.

“I am confident that by the time you return from the Holy Lands of Mekkah and Medinah, you will not only be stronger in faith, but knowledgeable enough to continue to propagate Islam and also advocate for peaceful and harmonious co-existence of all religious faithful in the state”, he said.

The Governor however added that in fulfilment of his electoral promises, his administration has initiated efforts for the continued general well-being and betterment of all religious faithful in the state.

“Within our limited resources, the present administration has provided the necessary supports to the Muslim Welfare Board to ensure that befitting accommodation, feeding and transport arrangements both in Mecca and Medinah are available for the intending Pilgrims from the state”, he stated.

The Chairman, Ondo State Muslim Welfare Board, Alhaji Khaleel Fawehinmi said they will go through Medina where they will spend few days and will leave for Mecca city on Friday immediately after Jumat service.

The intending pilgrims, Fawehinmi, said will spend less than thirty days at the Holy land before coming back few days after climbing Mount Arafat.

While addressing the pilgrims, he urged them to adhere strictly to the rules and regulations of Saudi Authority for a hitch-free exercise and to contact the board official when the need arises.

The Chairman of the League of Imams and Alfas, Alhaji Ahmed Aladesawe, while admonishing the intending pilgrims, appreciated Mr. Governor for appointing Muslims into his administration and particularly for the appointment of the Muslim Welfare Board Chairman, whom he described as performing beyond expectations.

Aladesawe, who prayed for the success of the present administration, recounted government’s efforts on the Muslim community, and for the provision of a particularly  befitting Hajj camp site.

An Intending pilgrim, Alhaji Isiaka Olatigbe Usman, who spoke with The Hope said that they will abide by the instructions given and will be good ambassadors of the state.

Usman appreciated governments’ continued efforts at improving the welfare of Muslims and particularly sustaining the activities of the Muslim Welfare Board.

Also, Alhaja Nurat Gbadamosi applauded the activities of the Board hailing it for performance well.