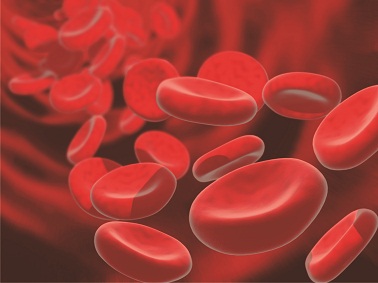 By Dr. A.I. Irinoye
|
Blood consists of three substances mainly and these are suspended in the blood fluid. Blood is the red­dish fluid that flows in our vessels. The three sub­stances in blood are:

Haemoglobin is the blood protein and iron that reversibly binds oxygen and is contained in the red cells. The normal range for haemoglobin concentration is

The blood fluid is called plasma, this is a yellow fluid which contains three groups of plasms proteins namely.

The total body blood volume of a normal adult is about 4 litres out of which the plasma carries about 55 percent, red blood cells and while blood cells take 45 per cent while the platelets take an insignificant volume.

From conception up to the fifth month of foetal life, blood cells are formed both in the liver and the spleen. Thereafter, blood formation takes place increasingly in the medullary cavity of the bones. Blood cells have a limited life span and require to be continuously re­

placed. The mature red blood cell is a circular disc, bicon­cave in shape to allow the cell considerable plasticity, en­abling it to pass through the capillaries and other struc­tures of smaller diameter. The red cell membrane is a com­plex structure through which water, potassium, and sodium ions, can pass by active pro­cesses the red cells membrance carries the blood group characteristics on its surface. The red blood cell has specific requirements for substances such as iron for haemoglobin formation. Blood formation is controlled : by a hormone called erythro­poietin which is produced mainly in the kidneys.

The function of the red blood cells depends on their content of haemoglobin which is formed as the red cells mature in the bone mar­row.

Formation of Blood cells: Red cells are formed in the bone marrow from nucleated cells called erythroblasts. The nucleus in the cells disappear before the cells enter the cir­culation. The newly released red cells are called reticulo­cytes. The proportion of this is low in the adult’s red cells but the proportion increases with increased bone marrow activity e.g. after a heavy blood loss.

Ingredients required for the formation and

All the above are present in a normal balanced diet. Deficiency of one or more may occur if any of the following occurs.

The red cells of normal size are called normocytes. In iron deficiency, the red cells are smaller than normal and are. Fig. 1. Shows the normal red blood cells formation stages in the bone marrow.

Fig.2. Shows the picture of iron deficiency anaemia on the red blood cells.

the red blood cells are larger than normal, this is the exact opposite of blood picture of iron deficiency anaemia.

This means a reduction in the haemoglobin concentra­tion (red blood Cell volume) of the peripheral blood below ‘ the normal range (as stated above). This results in re­duced capacity of the blood to transport oxygen to the tis­sues. When anaemia occurs, the red blood cells are usual but not always reduced in number.

/Anaemia may be clas­sified into 3 main types.

Clinical features of anaemia and symptoms

Vitamin B12 can cause de­generation of the peripheral nerves of the body. This pro­duces numbness and tingling sensation of the feet, weak­ness of the legs and incoordi­nation. Sometimes these changes may develop earlier than the anaemia.

Mention must be made of other types of anaemias that can be caused by toxins, drug reactions, use of ste­roids etc.

The average life span of a red blood cell is 120 days, after which the cells dies and is broken down in circulation. When red bloods cell is bro­ken down at a faster rate than the clearance rate, the spill over appears in the eyes as jaundice. It must be stated that the deformed red blood. cells e.g. sickle -cell anaemia dies faster than the normal red blood cells.

Polycythaemia may be cause by reduced oxygen intake due to whatever cause as seen in people living in montainous areas.

Another important com­ponent of blood is the white blood cells. In a healthy adult about 70 per cent of the cir­culating white cells are granulocytes and 30 percent are Lymphocytes. The granulocytes are the sol­diers of the body, they kill and ingest bacteria entering the body.           The hympthocytes produce an­tibodies and cooperate with the granulocytes in the fight and defence of the body against infection. The worn- out blood cells white or red are destroyed in the spleen. This is an organ that lies to the left of the upper abdo­men, protected by the lower ribs. It is not normally felt by touching the abdomen but when it is hyperactive as in massive red blood cell de­struction it becomes grossly enlarged.

This can be washed and squeezed in little water, this can be taken raw daily. It is noted for enriching and re­plenishing iron in the body , it is very useful for pregnant women.

The ones with small leaves Efirin wewe is very good for the body. It can be taken raw and as stimulating spices in food and soup. It can be used with hot water as tea in the morning.

This is a very popular vegetable herb in this country. Is’ It is found in the rain forest area.lt is a climbing plant. It is very rich in iron and min­eral salts which is much needed by the growing body. It is best taken raw after washing. This can be squeezed with a little water and taken as tea, a little honey may be added to taste. Boiling rapidly destroys the usefulness of this plant.

This is washed and cut into small pieces and a little water added to just cover it in a pot. This is boiled for about one hour allowed to cool and taken regularly say I glass once or twice daily.

The divine beginnings of modern sports