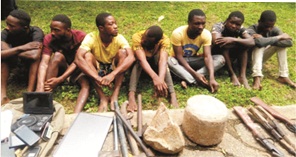 The Commissioner of police  in the state, Mr Azukwo Amba  also confirmed the arrest of  five other persons for alleged   unlawful possession  of firearms.

The Commissioner  gave the names of the suspects as Sunday Ojo, Agbabiaka Amidu, Osewende Babatunde,  Ogunlade Babatunde and Adesina Tunji.

Briefing newsmen  at the Ekiti State Police Command headquarters,   along Iyin road,  Ado-Ekiti, the Commissioner said the EKSU student who  was suspected to be a member  of Eiye supreme confraternity was  arrested at a liquor joint opposite the university, while planning to unleash terror on other students on   campus.

The police boss added that upon the arrest of the suspect, operatives of the Special Anti-Robbery Squad (SARS)  of the command also  received a distress call from  residents of Ekute Quarters, Ado-Ekiti that some unidentified persons invaded the area and broke into three houses using big stones to break their doors.

The police boss said during the incident,  the suspects allegedly robbed their victims of valuable items including cash,stressing  that when the officers arrived at the scene, the suspects were arrested.

Items  said to have been recovered from the suspects, according to the police include,  blue beret, one Itel handset,  one cut to  size single barrel gun,  two live cartridges, one power bank,  wrist watch and two big stones.

The Ekiti State police helmsman disclosed  that the arrest of the suspects was made possible through diligent and painstaking  operations and investigation by the police in the state under his watch.