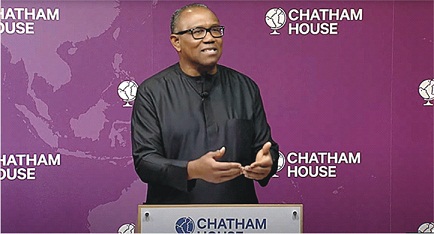 Executive presidency of Nigeria is an office  which should not  be adventured light heartedly or recklessly, or with one’s mind suffused  and dominated with self regarding ethno-centric  or tribal and religious prejudices, predilections and partial affections.” Excerpt from the speech entitled  “The making of Nigeria” by Chief Obafemi Awolowo while accepting his nomination as Unity Party of Nigeria UPN, presidential candidate on October 6, 1978.

Mr. Peter Obi, presidential standard bearer of the Labour Party (LP) in a media briefing at  Chatham House in London can tactically parried a leading question on his detailed plans towards quelling secessionist agitation  and unrest across the country.

Peter Obi should  be more specific and forthcoming with clear-cut  modus operandi in tackling the  prevailing worsening insecurity breaches as a result of the activities of  the milia wing  of the   Indigenous People’s  of Biafra (IPOB) in the South East of Nigeria clamouring for the revival of Biafra republic.

There is a gulf of difference between youth course exact strains and pressure on governance   around the world and the armed secessionist agitation to dismember one’s country.

LP candidate should be honest and bold enough to make a  distinction  between the  untoward  world, Nigeria inclusive and the revival of  a dead republic, Biafra more pronounced in a fierce battle in his (Obi) domain. Such rank indiscipline, lawlessness and army of occupation cannot be condoned in any part of Yoruba land.

Although there could be  sporadic, spasmodic and tenuous agitation for  Oodua republic by a few socio-political malcontents in our  midst, their nefarious activities could easily be contained, overwhelmed and eventually mowed  down by the people’s might and security agencies.

In Yoruba land, we don’t allow organized armed secessionist group to challenge and subvert our inalienable right to self determination within the frame work of federal republic of Nigeria. A few irritants, political nitwits and  non  conformists within may want to spill the beans, the long arms of the law will certainly catch up with the undesirable elements.

So, it is  unthinkable for   Peter Obi who is contending for the highest office of the land  i.e the presidency to be evasive on the stark reality in ground and play to the gallery which may be disastrous to  his political image and the  unity of the country in the ultimate.

By all means, we must not allow the unedifying bitter experiences of the past to haunt and repeat itself to be reminiscent of the pre Nigeria/Biafra  civil war. Some Igbo elite still admitted that  Awolowo led Igbo to civil war by taking his  statement out  of context.

Awo, as leader of thought for the Yorubas did say unequivocally that if by either act of  commission or omission, the Igbos are pushed out of the federation,  Yoruba will follow suit.

Deliberately and most unfortunate too, some tribal jingoists  deleted the clause ‘act of commission and  omission, and unconscionably  sentenced more than 2 million Nigerians to open graves and abandoned infantile Biafra to waste away and left  the vulnerable  children  devastated and ravaged by Kwashiorkor.

Therefore, it is wicked   a deliberate falsehood and political misadventure for Peter Obi to equate the general insecurity pervading the country with the persistent incendiary agitations for another separate nation to which majority of Igbo political elites  either  covertly or  overtly subscribe.

It is obvious that the whole country is submerged in youth restiveness  which culminated in banditry, violence, murder, ritual killings, terrorism and insecurity.

The presidency is never  a tea party affair to be approached light heartedly, with tinge or mischief making as a dumb rated on  recorded speech of the late sage and elder statement, Awo.

Race for presidency at   any point of our national development is indeed a marathon race that must be accessed with all solemnity, high mental and spiritual depth that it  deserves.

Besides, the role of Igbo intelligentsia  in  the survival of the nation cannot be wished away regardless of the misguided, tragic and unfortunate holocaust of Nigerian/Biafran civil war. It is high time the Igbos both at home and in Diaspora halt the  intransigence and youthful exuberance of the likes of Nnamdi Kanu and stop playing prattle  but join hands to build a virile, more united and prosperous nation where no one will play second fiddle.

To whip up unnecessary  and vain tribal and religious sentiments is to defeat and ridicule the essence and purpose of standing for popular election and gross betrayal of  trust usually reposed in any lawful public spirited candidate having the entire country as his constituency.

Igbo leadership should not at this material times involve self indulgence and self pity in   canvassing for presidency on a platter of gold.

Instead  of indulging in  rigmarole and phobia of hurting  Igbo sensibilities, Peter Obi of LP should take the lead with rate courage to publicly call for the  outlaw  of the Indigenous People of Biafra (IPOB) which from time immemorial  constituted a terror outfit, and has been a blemish and  constant drawback, threat on the people’s just struggle for better society.

Granted that Peter obi is well disposed to rule Nigeria without harbouring hidden agenda to resuscitate the failed Biafra republic and consequently subjugate the rest of the country, common sense dictate that Peter Obi, in his public outing  at Chatham  House, ought to have urged IPOB to lay down their arms and let peace reign throughout the length and breadth of  South – East as pre-condition for the release of the fugitive offender, Nnamdi Kanu.

Dr Nnamdi Azikiwe  (Igbo from Onitsha), the first president of the Senate and first ceremonial president of independents and sovereign Nigeria once displayed the sterling attribute of humiliating patriotism and sacrifice for the nation to survive the anguish and perils of  civil war.

At this most critical and trying period of the war, Great Zik made u-turn by calling for  truce  having paid a surprise visit to Head of State General Yakubu Gowon in Lagos. Zik also met with his kith and kin in the war-torn areas.  This was not oblivious of the fact that Dr. Azikiwe was believed to have composed the National anthem of Biafra, now defunct.

Great Zik was an epitome of courage and patriotism and the unity of Nigeria was second to none to his career in politics inspite of his uncanny allegiance to the survival of Igbo nation.

For Peter Obi to make a success, he needs to  realize his ambition to govern well is to imbibe the outstanding quality of patriotism of the early nationalist politicians of Igbo extraction, Zik,  Mike Okpara, former premier  of Eastern Region, Mazi Mbonu Ojike, former deputy mayor of Lagos in the colonial administration to mention just a few. They blazed the trail of unity and progress of Nigeria.

Peter Obi must not  be dazed and infatuated with the sudden fiery passion of the exuberant  youths and some people scattered all over the country who erroneously bank on religious bigotry and ethnic chauvinism to elect  Mr.  President.

The president must lawfully have the whole country as his constituency to make him or  her acceptable to all and sundry.

What must be uppermost in the minds of  Peter Obi of LP and other presidential flagbearers   is to deeply reflect and cogitate on what Chief Obafemi said as follows “This high office of president carries with it enormous obligations and herculean responsibilities. It is not at all an office  of pleasure, nor is it one of unmixed pomp and pageantry.”

He continues, interalia; “Governing Nigeria, at any time is a very difficult and onerous assignment. But the remaking of Nigeria is a task that calls for probity, dedication and uncommon courage of a very high  order in addition to rigorous planning, Spartan self discipline and exceeding industry. In other words, the remaking  of Nigeria is feasible only. If we first and foremast remake and re-create ourselves, this  is to say those who offer to lead  this county aright must strive constantly to lead themselves  out of the unruly prompting of instincts and liberate themselves from the “tyranny of the flesh” in all its octopoid dimensions.”

Those who wants  to lead Nigeria must sedulously cultivate  aforementioned attributes and other edifying qualities of forthright, able, enlightened and public spirited leadership and be  well prepared, focused for the challenges of modern governance  as  they unfold.

For national interest and development, our aspiring leaders are urged to steer  clear of  tribal jingoism and  religious bigotry, petty chauvism and parochialism lest they are submerged  in their  own  follies.