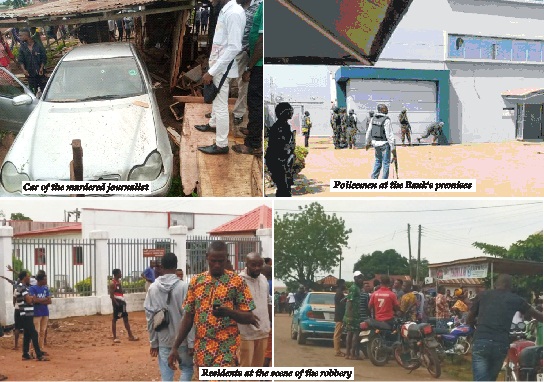 Ilara-Mokin, the serene location of a university came under the siege of armed bandits yesterday, claiming the lives of a journalist, policeman, and a motorcyclist during a bank robbery operation.
One of the casualties, a Journalist, Olubumi Afuye, was hit by bullet which shattered his frontal head while on motion, while the two others were killed by stray bullets from the bandits.
The Hope gathered that late Afuye, who was recently employed by a private university in the town was on his way to work when he ran into the robbers who shot him dead at close range.
The robbers reportedly besieged the town in large number and started shooting sporadically to scare people away before gaining entrance into the bank where an undisclosed amount of money was carted away.
Dynamites were said to have been used by the bandits to gain entrance into the banking hall.
Sources said the hoodlums operated for several hours unchallenged as sounds of gun shots made residents scampered for safety as the robbery lasted.
The journalist, was at the Programmes Department of Orange FM until recently when he was employed as the spokesman of the private university.
Contacted, the Ondo State Police Commissioner, Mr Bolaji Salami, confirmed that two persons, a policeman and a civilian died.
He said he had dispatched a team of policemen led by the Deputy Commissioner of Police in charge of Operations to ascertain the situation.
According to him, none of the officials were seen at the scene of the incident as at the time policemen arrived there.
He added that details of the robbery would be made known just as he commiserated with the families of the victims.