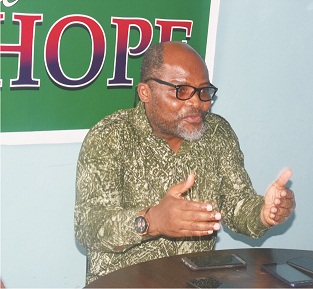 Dr. Doyin Odebowale is an astute academic, and Senior Special Assistant (SSA) on Special Duties and Strategy to Ondo State Governor. In this interview with The Hope, he speaks on the government’s efforts to sanitise the transportation sector of the state and the role of our universities in nation development.

Let me first thank you for extending this invitation to me, and let me congratulate you with the little you have done so far since your appointment. I was with the governor when he recently discussed the layout of your newspaper. The Hope before now was an eye sore but when I saw the current edition, where the Deputy Governor visited Ayetoro over the sea incursion, and I said, yes, this is a what a community newspaper should look like, I was so happy.

So talking about my job, my designation is SSA on Special Duties and Strategy. I work with the governor, I take direct instructions from the governor on what to do. I straddle all ministries, I work with the Board of Internal Revenue, we try to assist the board to ensure that whatever the state get should be remitted to the state.  We track payments, and other sundry issues to ensure that proper things are done.  Nobody is allowed to collect money from  members of the public without trace.  We want to ensure that what you collect from the public is what the government expects you to collect, and we want to ensure that it enters government’s coffers unlike what was happening before.

When the fuel scarcity happened , our major assignment was to intervene. We act as public ombudsman for the government to ensure that wherever there is any complain they call us. We have a task force attached to the office of the governor to move in immediately.

That is commendable. Now, some weeks ago you were quoted as saying government will not allow any Okada rider to wear mask.  Has that directive been complied with?

Almost entirely. If you see any okada wearing mask, you have the right to stop the person and get him arrested. We don’t allow them, because some of them complained of the wind against their eyes and we said okay you can use wind shade to protect the eyes but we must see you. We impound their motorcycles and make sure it’s registered(cuts in)

Some didn’t comply, because some few days ago, our camera man caught somebody in front of a Bank trying to snatch money from people who had just left the bank and he was arrested and he came on Okada. How do we check the menace?

We are trying.  Before we came into office, they used them for kidnapping, they used them to rob, but now I can tell you that in all junctions in Akure, in all their units, if there is any crime committed in any part of Akure South, within 20-30minutes, we will know. We work with the SSS, we work with the Police, in fact, a special unit is attached to my office by the Commissioner of Police (CP). We are so mobile, we don’t wait for protocol, just call, we will move in. In fact, the 419 guys who will pose as travellers and as if they don’t know where they are going  around Oja-Oba, Arakale, we have driven most of them out of the state, we are catching them. Some will even use taxi and all of them including the taxi drivers are the same.

So we don’t allow anyone of them (Okada) to move near the banks, as a standard practice we even implore the police to drive them away. The major problem we have is the government agencies, everybody wants to be in the market to extort money from these market women, they are just giving them stalls, so we want to clean these things off.

One of your responsibilities is to ensure that money comes into the coffers of the government. People are complaining about multiple taxation, how do you alleviate the suffering of the people?

I think we have to know what they are complaining about I’m happy you bring this up. I think you also need to interview those who sent them out. The primary purpose of governance is the welfare of the people.  Remove that, you are just bandits. When you go to the market, what comes to your mind is what you are going to get from that woman who sells vegetable, fish, groundnut oil, so that, you can pack everything home to cook.

Most of our agencies have not been doing well, some of the bad ones go about harassing people, we have been arresting them.  Imagine a senior public servant collecting money and putting it in his pocket, he is going to court, nothing is stopping it.  His career has ended. I can tell you that many of these people just go into the markets collecting money, no receipt. What has the ministry of environment got to do with your shop? Is that the mandate of the Environment? We have been arresting them, they refund money and they have given me names but I can’t be bothered. You should shout about their activities not multiple taxation.  This is criminality. Go to any local government they don’t come to work, you find them at the market 8:30am extorting money. And after they have collected the money 419 guys will take over and be harassing these market women.  We have been trying to stop them, that is why you are  in the market? Somebody said she is SA market, you are SA market must you sit in the market? You see we have a lot of problems, so anyone who has a specific information about what any stupid person is doing under the guise of working for any agency should come up and let us know. They have no right to do what they are doing, Environment has no business going about collecting money from shop owners. I was forced to go to Arakale to evacuate dirts, they collect money from people to evacuate dirts but they failed the mandate.

You were in the academics, and now you are in government, how are your two experiences like?

This is the first administrative experience I am having. I taught for 22years in the university. I deliberately avoided all these committees, but I was in ASUU all through. What I found strange here is the attitude of people to work.  Though in the university environment, there are also many funny elements there too, but in this place you see people who steal and still believe it is their right to steal.  They have this sense of entitlement, to be paid for work not done, and you think someone owes you an obligation for your indolence, that really shocks me. My wife is an indigene of this place and prior to Aketi in politics I was coming to this place, going to Akoko, Owo. But living in Akure, working in the midst of civil servants, many people don’t deserve to be paid. They deserve to be in jail. The experiences here have been mixed feelings. I made new friends; all these street boys are my friends, in fact, I hardly go home now.

Is government held hostage by this kind of attitude?

Very very much so. For I am from a tradition which believes that you don’t send people out of job, rather you engage them, give them what to do, you don’t talk about people being redundant.  Whenever  those who are on ground are under-engaged, you have to be creative and find ways of engaging them but when they now refuse to do what you ask them to do, that is when you now ask them to go. There is a problem.  We pay lip service to the idea of merit, we don’t follow merit and that is what is killing everywhere in this country. You don’t have to keep workers that you don’t need. Why some areas don’t have at all, others are saturated, it shouldn’t be like that. The very first thing for the government to do is not just to retrench,  that may be inevitable if we want to be truthful but that is not the first step.

Look around, is there a ministry where you have 36 drivers and you have four functional cars? Are there other areas where you can deploy these people to so that the public that is being shortchanged can get value for money.  Because you pretend when your salary is not being paid and you are fighting for minimum wage you are fighting for the public, that is not so, it is fallacious.

Do you think our universities are focused to meet the objectives for which they are set up?

They are not focused that is why you see the so called LAUTECH pretending to be offering Medicine and Law. A university of technology offering Accounting, Business Administration and you want people to employ your products? Go and check their curiculla. Education should not be mistaken for certification.  I have BA, LLM , but I abandoned the LLM when I was following Aketi.  I started the second time outside the country, I left it again and came back when we won. But all of these amount to nothing if people in my village don’t even know the value of my education. If I am Idanre man, and I’m trained on how to swim with all my qualifications, am I useful to them? If I’m from the south, and I’m trained in mountain climbing, my certificate is useless.

So our curriculum should reflect the challenges we face as a people! Once we loose focus on that, we have lost everything.  How can you be producing graduates who are not problem solvers, how can you be producing those who are perpetually on the society to feed them? And they have this sense of belonging that they are graduates but not employed, it is shameful!  Most of these phones we use, Chinese in primary schools do them. Our graduates are adding more problems than solving. We need to restructure. My son who is studying Information Technology abroad called me sometimes and said “thank you sir for the opportunity you gave me to come here, do you know that none of the Nigerian graduates could be admitted here for postgraduate studies? Because they were not taught at all.  Even those with first class in Computer Engineering”. He said what they teach a first year second semester here, no final year student would ever get to it. How can we be doing something like that in Nigeria where there is no light?

So curriculum is key. The children we are training now should be such that in future, they will fix our roads, they will feed us, they should plant what we will eat. If we keep depending on Thailand to give us rice and Korean and Chinese to fix our roads then, we have not gotten anywhere. Why should we come and do jamboree of commissioning the road built by the Chinese?  The only time we can celebrate is when our children design a road and they are the ones who do the construction to completion. We are successful if our children participate up-to 70percent but for now, we are doing nothing.