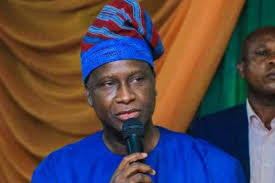 From Fisayo Akinduro, Osogbo
|
The Osun State Government has restated  its commitment to engage youths in order to turn around the economic fortunes of the state for the prosperity of all.

The Deputy Governor, Benedict Alabi who disclosed this in Osogbo appreciated the people of the state for the love and acceptance always shown to the present administration of Governor Gboyega Oyetola.

Alabi stressed that as Osun is one of the two states after Kebbi that Federal Government has selected to kick start training on mining development, this would further complement the effort of Governor Oyetola in providing skills acquisition for the youths for self reliance.

While stressing government’s efforts to engage the youths, he said about four out of nine technical colleges in the state are already equipped to enhance vocational education in all the federal constituencies across the state.

He advised the youths in the state  to desist fromany act that could destroy their future.

The deputy governor described Oyetola as a blessing of God to the state by his show of serious commitment to the welfare of the workers and the generality of  the people.

He called on the people of the state to continue to support Oyetola in his effort to take the state to the next level.