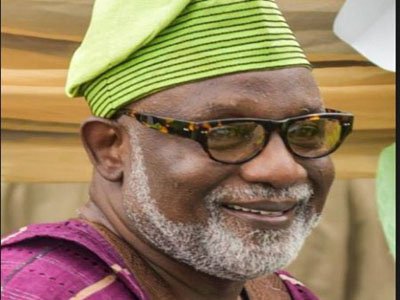 Oba Adedoyin gave this commendation while speaking with The Hope in his Law Office in Ikare Akoko.

Owa Ale who was recently elected as the President of the club of the 130 crowned monarchs in Ondo State stated that the governor has taken a bold step in the areas of security, infrastructure, education and health sectors in the state.

He gave kudos to Governor Akeredolu for facilitating the establishment of four new Area Commands of the Nigeria Police at Ikare Akoko, Akure and Okitipupa.

According to him, this has and will continue to strengthen the security of lives and apparatus in the state.

Similarly, he thumbed up the restoration of electricity to some areas in the state’s Southern Senatorial District and the ongoing renovation of some public primary schools across the state.

However, the Akoko monarch has appealed to the governor to facilitate the early completion of the Oke Alabojuto and the dualisation of Ikare township road as well as the ongoing rehabilitation of the failed portions of the Owo/Ikare road.

Similarly, Oba Adedoyin has passionately appealed to the governor to extend the ongoing rehabilitation of roads in the state to all Akoko roads which according to him have all become deplorable.

“I strongly appealed to Arakunrin to take his rehabilitation job to Ikare/Okeagbe/Afin road, Ikare/Ajowa road and all Akoko roads”

“The roads are painting a pathetic story. They are all in deplorable state and no motorist want to ply these roads and indeed they are being avoided like a leper”

Meanwhile the monarch has also called on the governor to actualise the promises he made to traditional rulers in the state by making the institution an integral part of government in the state.

Similarly he pledged the support of the club of 130 Crowned Obas in the state for the government.

In the same vein, the Owa Ale has appealed to traditional rulers in the state to see that law and order is maintained before, during and after the 2019 General elections.