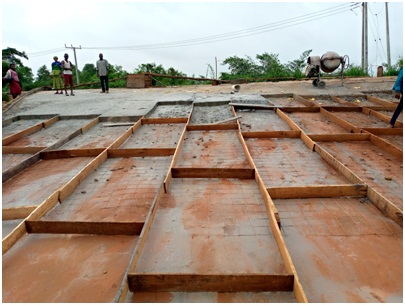 The residents of Information Village, Old Aponmu Road, Akure have taken the bull by the horn to complement the effort of Ondo state government on road rehabilitation and construction to construct some metres of the road in the community.
The road, which connects about 20 communities along with the Akure-Ondo express way, has been in deplorable condition for many years, despite numerous cries to past administrations in the state, the Chairman of the community, Mr Olanrewaju Oluwateru told The Hope.
He said the bad road had led to damage of residents’ vehicles and accidents, especially during the raining season.
Oluwateru further revealed that over N1.7m was spent on the project and about the same amount would be spent to complete the few metres to be constructed by the community.
The community leader also disclosed that previous governments in the state could not fix the road but to their surprise, government record showed that the road had been fixed.
He appealed to the current government in the state to support the community to complete the road, which leads to several agrarian communities, industries, schools and farms.
Also speaking, the Secretary to the Community, Mr Babatunde Adeeyo and the Community Women Leader, Mrs Funmilayo Ibrahim also appealed to the state government to help complete the rest of the road, which they said had many economic benefits to the residents and the state at large.
“We have many farms across the communities here and there are industries as well. But this road has been our major problem.
“Government can fix this road to open the communities to development,” Mrs Ibrahim pleaded.
The site Engineer, Mr Martins Owoyemi commended the efforts of residents, promising to work according to specifications.