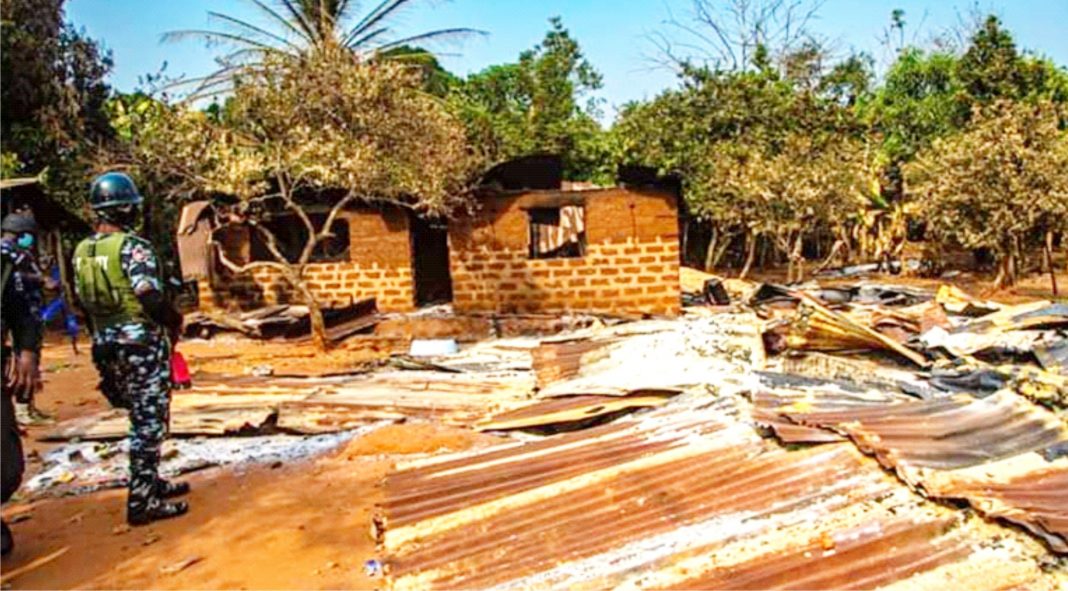 Ten days after, Omolege, a community in Ose Local Government was attacked by suspected Fulanir herdsmen, the community remained desolate as inhabitants have deserted the place.

The suspected herdsmen had attacked the community on Tuesday January 6, setting some houses on fire and killing three persons following the people’s refusal to allow them (herdsmen)  graze on the community farms.

When The Hope visited the village yesterday, the community was like a ghost village as none of the community members was found except for the stern looking security men on guard.

A security officer told our reporter that the people only came to the place when the State Governor, Arakunrin Oluwarotimi Akeredolu, visited on Sunday.

According to him, the people returned to their hideouts immediately after the governor and his convoy left, adding that some have relocated to Ute, Imoru and Ifon where they now squat.

Meanwhile, our reporter had an hectic time going to Omolege and coming back as youths in Arimogija, another community which shares boundary with Omolege have taken over the security in the area.

The youth mounted not less than 10 security checkpoints, conducting stop and search measure on vehicles and people coming in or passing through the town.

Arimogija, was said to have also been attacked by the rampaging herdsmen.

The youth have also turned the checkpoints into money making venture as they collect toll fees ranging from N100 to N200 from commercial motorcyclists, the only means of transportation to the area.

Our reporter was prevented by the angry youths from talking with some people in the town while they also threatened to break his phone in any attempt to take any photograph.

Governor Akeredolu had on Sunday visited Omolege to commiserate with the people over the death of their loved ones, particularly the community head.

The governor said no government would be happy with the killings of the people.

He visited the scene in company of the state Commissioner of Police, Oyediran Oyeyemi; Commander of Amotekun Corps, Akogun Tunji Adeleye; and some members of the state executive council.

At the scene, Governor Akeredolu, while describing the attack on the community as unfortunate, vowed that concerted efforts will be made to ensure that such attack does not reoccur in the state.

He said:”I commiserate with you on the death of your loved ones. May their souls Rest In Peace. No government will be happy with this kind of development.

“But you have to be prepared. These herdsmen are becoming too problematic. We are not sleeping. You can see Police and Amotekun here. With this one they have done, we will ensure that it is their last evil act here.

“Those behind this are criminals. Those supporting them are all criminals too. Anyone who commits crime will answer for it. The Police and Amotekun with other security agencies will set out and bring them to justice. We will treat them like criminals.

Earlier, the Akarigbo of Ute Land, Chief Felix Olabode, narrated how the ugly incident happened during an interview with The Hope.

He said:”I was home when we heard that some gunmen came and killed people here. We came here immediately and we met a dead body. These buildings have not been razed.

“When we alerted the Police, the DPO came and we didn’t know that those people were still around. Not less than 30 minutes after the Police evacuated the dead bodies the gunmen came back and razed these buildings down.

Coordinator of the Oodua People’s Congress (OPC) in the area, Folorunso Olofe disclosed that the gunmen were always attacking with AK 47.