Under my watch, insecurity ‘ll be curbed-Obi 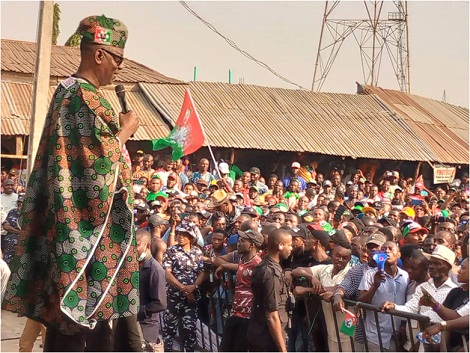 The presidential candidate of the Labour Party (LP) in the next month general elections, Peter Obi, has promised that the issue of security facing the country will be the thing of the past under his watch if elected.

Speaking during a rally in Akure,the Ondo State capital at the weekend, Obi noted that the country will be more secured with him under the platform of LP at the helms of affairs just as he said that the entire Nigeria is insecured and people are living in suffering and hunger.

He said he would secure and unite Nigeria for the country to be moved forward from consumption to production.

While assuring that no Nigerians will leave his or her community due to insecurity,Obi said  strikes will be put an end to and support for small businesses will be given as well supply of electricity and fight against corruption will not be taken for granted.

“We will make sure that our security men work in a conducive environment and their families will be okay so that they can protect the citizens very well.

”We’ll install structures that will work in Nigerian,”

Obi used the venue to accept himself as a stingy person as it was said by the presidential candidate of the All Progressives Congress (APC), Asiwaju Bola Tinubu during the latter’s rally in the state.

In his reply, he said the country would be safer in the hands of a stingy man like him

The former Anambra State governor accepted being stingy, but not corrupt.”Yes they said l am stingy, but we are not out to steal the nation’s wealth. We want to make sure we use your money to transform the country.

“They said I’m stingy, this will enable me to invest in education, health, economy and other sectors to develop the country.

“Through my stinginess, l was able to save $156 Million for Anambra State Government without owing any bank, contractor or financial institution despite the sorry state l met the Anambra when l became governor.

“This coming election is about character. You know our background, the scattended.“We want

“A four-year course will be four years. We don’t want our children to spend more than stipulated years for each course.

The National Chairman of the Labour Party, Julius Abure, lamented over the situation of the nation, saying that ” we are ready to make Nigeria work again.

Abure added that “somebody like Peter Obi who has what it takes to rule Nigeria as the next president is needed to change the political narratives and dynamics.