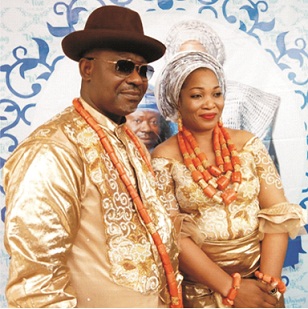 By Josephine Oguntoyinbo
|
Ondo State Governor, Arakunrin Oluwarotimi Akeredolu, SAN, and his wife Betty were among the important dignitaries, who attended the traditional wedding and reception of the state Commissioner for Women Affairs and Social Development, Hon. Omowumi Olatunji-Ohwovoriole and her heartthrob, Barrister Tive Ohwovoriole last weekend.

The event started with a traditional engagement ceremony which took place in her family compound at Oke Emesho Street, Akure, the state capital. This was followed by an elaborate reception which took place at OSDPC multipurpose event center, Ijapo Estate also in Akure.

Speaking at the event, the chairman of the occasion, who is the state chairman APC party in the state, Engr. Ade Adetimehin, who thanked God for the glorious day prayed that the couple will live happily together forever.

While describing marriage as biblical, where a man shall leave his father’s house and cleave to his wife and the two shall become one flesh, he stressed that marriage is a glorious and joyous thing.

The chairman enjoined the couple to be patient with one another, solve differences internally, and shun third party interference, saying there is no marriage without  minor disputes.

Adetimehin harped on the need for husband to love his wife, while the wife must equally be submissive for their marriage to last forever.

In separate interviews with Weekend Digest, Family members of the couple urged them to always look unto God, be patient, and persevere so as to breakthrough in the journey of marriage. They pledged to always pray for the couple.

The commissioner while fielding questions from some selected journalists described her husband as a good man with a large heart who understands her very well.

She added that her husband is very accommodating as he tolerates her excesses which makes him different and unique.

She thanked people who came from far and near to celebrate with them, noting that she feels so great and give God all the glory for the success of the occasion.

Her husband,Tive Ohwovoriole said he was elated having found his treasure and soulmate whom he described as a rare gem and a perfect match.

He appreciated all people who contributed to making the day beautiful and successful.