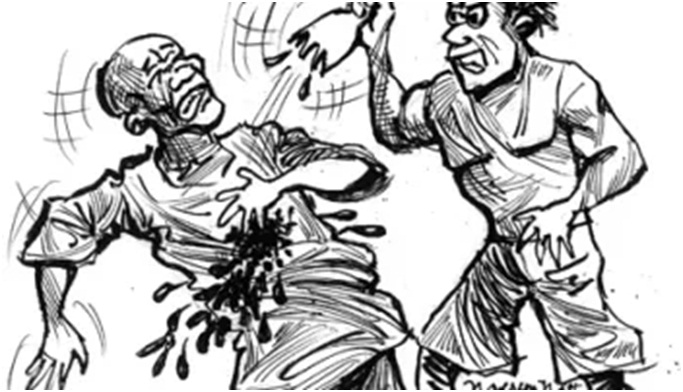 In what began as a mere scuffle between two drivers at a garage, a young man of 25 years, Dayo Idowu has been dragged to court after he killed his colleague, Sheu Saka by stabbing him with a broken bottle.

The secondary school graduate is now cooling his heels for the crime he committed sometimes in December, 2019 at Onyearugbulem Motor Park in Akure following his remand at the Olokuta correctional center since the onset of trial.

According to the prosecution D.B Kayode, the defendant was earlier arraigned before the court and he had entered a “not guilty” plea.

The defendant, Dayo Idowu and the deceased Sheu Saka were both drivers plying the Akure-Ibadan route at Onyearugbulem Motor Park. Trouble reared it’s ugly head two days before the fateful day when the duo had altercations which snowballed into a fight two days later.

The defendant claimed that he had apologized earlier in the day only for the deceased to hit him with a plank on the head while he was trying to board his vehicle.
Reportedly, this had angered the defendant and he had broken a bottle and dealt a blow on the deceased on his side and he had started bleeding.

According to the defense counsel, the deceased had fell from the impact of the wound which had provoked a mob action against the defendant by other drivers in the garage.
Eventually, the two drivers were rushed to the hospital but the deceased, Sheu Saka gave up the ghost.

The prosecuting counsel had called the deceased’s brother Saheed Babatunde to the witness stand.

He testified that he did not know the defendant before but only met him during the police investigation.

He stated that on the day his brother, Shehu Saka died, he was at his place of work at Shango, Ado road.

By 6.30 a.m, some of his friends called him that they saw his brother fighting with someone and was stabbed all over his body.

He said that he had called one of his siblings who owns a vehicle and they went to Onyearugbulem junction, the crimes scene.

He explained that they met crowd but that they did not see the deceased while some people told him that they had been rushed to the hospital.

Babatunde testified further that he saw his brother’s corpse when he got to the hospital.
He stated that he observed that the deceased was stabbed on the neck, shoulder and the stomach.

He stated that they asked for the person who fought with him and they were told he had been taken away by the police.

He further testified that they had to secure the corpse of the deceased for interment according to Islamic rites for burial.

He said that he knew that it was the defendant that killed his brother on the third day after the burial as the police at the Ijapo police station led Family members members of the decesed saw the defendant at the state CID where he was in hand cuffs.

During cross examination of the witness by the defence counsel, Akinyemi Olawale, the deceased’s brother maintained that he only saw his brother’s corpse at the hospital and was not aware if the defendant was wounded then and also rushed to the same hospital.
The defense counsel tried to lay claims that the deceased had an accident with his car and that the defendant was only trying to rescue and resuscitate him when the angry mob mistakenly descended on him.

Police witness, one Inspector Yunisa Morayo, attached to Ijapo Police Station stated that the case was reported at the statlon that the defendant and the deceased were fighting and the former had beaten the latter to death.

Another police witness, Inspector Owolabi Segun of State CID stated that the case was transferred from Ijapo Division to the State CID for further Investigation.

He stated that he was one of the team of Policemen detailed to Investigate this case.
He testified that he recorded the statement of the complainants, and rearrested the defendant, charged and cautioned him in English language while recorded his statement.
The defendant was charged to the Magistrate Court while the duplicate case file was sent to the Director of Public Prosecutions for Legal Advice.

The prosecuting counsel sought an adjournment to enable the prosecution bring other witnesses to court.

The trial judge, Justice Adeyemi Fasanmi thereafter adjourned the case till February 1, 2022 for continuation of trial.

Man docked for raping employer in the farm